Three Dutch words, ‘God roept u’, shine out in blue neon lights on the roofline of the Samaritan’s Inn, next to the words ‘Jesus loves you’ we wrote about last week.

Meaning ’God calls you’, these words have been visible to all entering and leaving Amsterdam Central Station since the Second World War, formerly painted on a wood background. For the YWAM building where my wife and I now live was for much of the last century the national headquarters of the Salvation Army, or Leger des Heils.

Originally built as the Grand Hotel Prins Hendrik in 1896, seven years after the Central Station was opened, families and travellers could stay here overnight for one guilder and fifty cents, including breakfast. As the first horseless carriages began appearing on the roads, the hotel was bought by the Salvation Army which had started work in the Netherlands in 1887.

At first the ‘Army’ faced verbal and physical opposition from both the Christian and secular press because of their unorthodox evangelism and services. Their ‘down-to-earth’ language, and their avoidance of sacraments of baptism and communion as causes of too much division, led many to believe they were ‘a trick of the devil to bring the gospel into disrepute’. Early meetings in Amsterdam were broken up by unruly gangs.

Attitudes changed however during the very heavy winter of 1890-91 when the ‘Army’ set up shelters for the homeless with soup kitchens and food distribution. In six different halls throughout the city, ‘Army’ soldiers hosted thousands at Christmas dinners.

In 1910, on the last of his several preaching tours in the Netherlands, the founder of the Salvation Army himself, General William Booth (see photo), visited the Grand Hotel Prins Hendrik, now purchased as the command centre of the Army’s national work. Its prominent location further raised the profile of the Army’s presence in the capital and the nation as a whole, reflecting the growing respect for and influence of what began as The East London Christian Mission in 1865.

During the Nazi occupation of the Netherlands, the ‘Army’ was outlawed. The building was requisitioned by the invaders as the national supervisor’s office of trade unions. After the war, the Army repossessed the building, restoring the emblem and motto, ‘Bloed en Vuur’ (Blood and Fire), on the roofline and above the third floor the words ‘God roept U’. Bold messages of hope can still be seen on Leger des Heils buildings around the country, such as Twijfel niet, God is er (Don’t doubt, God is there).

When YWAM bought this building in 1980, (my wife as chairman of the board signed for it), it was not directly from Het Leger. For a decade or so it was squatted by various groups, from drug addicts to the Children of God sect. Floyd McClung, the YWAM leader at the time, picked up the old Salvation Army message and wrote a booklet: God roept Amsterdam. Amsterdam had once been a city with many churches and monasteries, a city of refuge for Iberian Jews, for Hugenots, for the Pilgrim Fathers, but now this city of tolerance had become famous for all the wrong things: drugs, prostitution and anarchy, he wrote. Yet God still called Amsterdam and Amsterdammers back to himself, to his love, to his purposes, wrote Floyd.

In the four decades that have passed since, many prayers prayed at the time have been fulfilled. The Zeedijk, starting to the left of the building, once a danger zone even for the police, has been cleaned up from the dregs of the drug trade; and Amsterdam now has a mayor who wants to close down the red-light district, accessed by the lane on the right side of the building. A leading secular national magazine recently ran an article under the title ‘Close the windows!’ asking, ‘is it not time for a definite end (to the red-light district)? The argument that women have a safe working environment there is nonsense!’

Many more churches are actively engaged both in preaching the gospel and sharing God’s love practically in Amsterdam than when Floyd lamented the lack of effective and united witness.

Yet the message ‘God roept U’ remains valid for Amsterdam, Amsterdammers, tourists and in fact all of us. Too often we have become deaf to his call: back to himself, to his love, his forgiveness, his healing, his purposes, his shalom.

May the many prayers prayed by generations of ‘Sallies’, YWAMers and others for God’s call to be heard in this city continue to be answered. 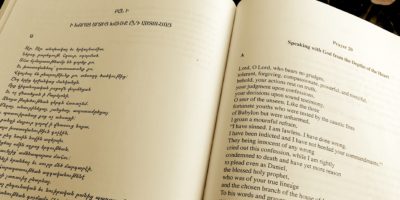 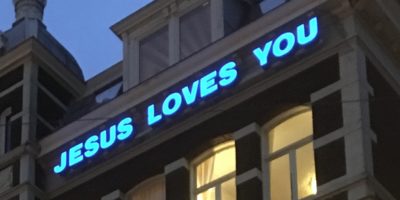