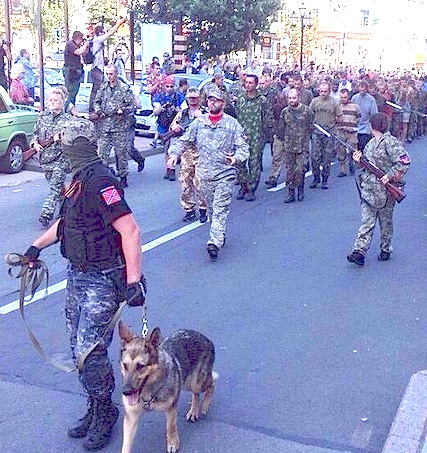 The parade of Ukrainian hostages by pro-Russian separatists through the streets of Donetsk over the weekend is the kind of ‘humiliating and degrading treatment’ the Geneva Convention was signed 150 years ago last Friday to prevent.
The convention – officially the Geneva Convention for the Amelioration of the Condition of the Wounded and Sick in Armed Forces in the Field – was the result of a daring proposal by a young Swiss Christian businessman named Henri Dunant after he witnessed the appalling carnage of war in northern Italy.
Dunant happened to be in the region south of Largo di Garda on business in June 1859 when wounded soldiers from the nearby Solferino battlefield began pouring into the town where he was staying. Army medical services were in short supply and Dunant found himself trying to organise help to relieve pain and suffering. The circumstances were overwhelming for both soldiers and civilians. The lack of adequate and humane care for the wounded and dying deeply affected the 31-year old Genevan.
This experience was a turning point in his life. To the neglect of his own business, he began to channel his energies towards preventing, or at least lessening, the horrors of war.
Humane
Until then, Dunant had been an active member of an evangelical church in Geneva, regularly visiting prisoners and promoting a world union of YMCA’s. At the same time, he was pursuing a business career, first in banking and then as entrepreneur with a project in Algeria.
Business had taken him to Italy when his life was dramatically redirected. Three years after the battle, he wrote A Memory of Solferino describing the human suffering of those left untended on the battlefield. Then he began advocating the organisation of voluntary societies with personnel trained to provide care for wounded combatants. This resulted led directly in the formation of what is today the International Committee of the Red Cross (ICRC), a global humanitarian movement with over 12,500 staff.
Dunant’s book also proposed an international treaty whereby the nations of the world would agree to more humane care for the wounded and the captured. He travelled widely to Europe’s capitals, speaking with politicians and military leaders, royalty and commoners, receiving widespread acceptance.
In 1863, an international conference resulted in Geneva establishing the principles on which the ICRC has been founded. It introduced ‘a common distinctive protection symbol for medical personnel in the field, namely a white armlet bearing a red cross’.
The following year, again due to Dunant’s efforts, the Swiss government invited the governments of all European countries, as well as the United States (still fighting a civil war), Brazil, and Mexico, to attend an official diplomatic conference in Geneva.
On 22 August 1864 – 150 years ago last Friday – the conference adopted the first Geneva Convention, establishing for the first time legally binding rules guaranteeing neutrality and protection for wounded soldiers, field medical personnel, and specific humanitarian institutions in an armed conflict. The idea was thus embedded in international law that even in times of war a certain degree of humanity must be preserved.
Dunant’s new focus sadly resulted in personal bankruptcy and social shame. He spent most of the next twenty years in obscurity until rediscovered by a journalist who brought him back into the global spotlight. At age 73, in 1901, he was awarded the first Nobel Peace Prize. The ICRC honoured him with a message from Geneva:  Without you, the Red Cross, the supreme humanitarian achievement of the nineteenth century, would probably never have been undertaken.’
Collective failure
Today however both the current Swiss president and ICRC president are concerned about ongoing breaches of the Geneva Conventions. In a joint international communiqué released on the 150th anniversary of the Convention last week, they called for an ongoing forum of states to address such breaches, writing:
Every day we receive horrific reports and pictures of unspeakable suffering in armed conflicts. All too often, serious breaches of international humanitarian law are the cause of this suffering. Underlying it all is our collective failure. The contracting states … have failed to give themselves the resources required to keep their promises. It is up to our generation … to create an institutional framework to ensure these rules are respected. If it is to be fully effective, the law needs suitable instruments.
We can be grateful for the ‘salt-and-light’ impact of one man’s Christian compassion 150 years ago. But today’s news from the Ukraine, the Gaza strip and Iraq reminds us that our generation still has much work to do.