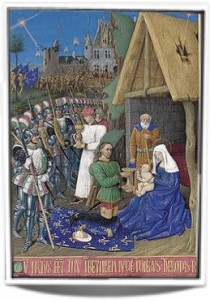 Here in the northern hemisphere we are enduring the longest nights of the year as we approach Christmas Day. Politically and economically things are rather dark too. Can we, like the wise men, glimpse a star of hope?

Our national leaders have been gathering to decide how best to bolster the Euro against the failure of several EU members to put their money where their mouth is. Unemployment continues to remain high–in Spain over 40% of the youth are without jobs.
The rise of nationalism, individualism and populism (popular movements generally seeking scapegoats as simplistic answers to complex issues) seems to be eroding Europe’s hard-fought solidarity.
How interesting then to read an editorial this past week in The Economist on hope! Tracing the development of Western ideas of progress from the Enlightenment (while ignoring their Judeo-Christian roots), the magazine noted that for 400 years the West had enjoyed a comparative advantage over the rest of the world when it came to optimism.
But now, the editorial claimed, hope was on the move–eastwards. Seven out of every eight Chinese thought their country was going in the right direction, while less than one third of Britons, Americans and French were happy campers. The emerging economies of China and India were growing at around 9 or 10 per cent, compared with about two or three for Europe and America.
Best of times
Also last week came stunning news that Chinese students–at least in Shanghai and Hong Kong–were leaving the rest of the world behind in reading, mathematics and science! China’s student numbers have multiplied four times over in the last 20 years, and UNESCO estimates that the developing world now produces 40% of the world’s scientific researchers. This promises major changes in the near future.
The Economist put a positive (capitalistic) spin on these develop-ments, predicting that the emergence of new great powers would benefit the West with more customers.
‘This is, in many ways, the best of times,’ the editorial concluded. ‘Hundreds of millions are climbing out of poverty. The internet gives ordinary people access to information that even the most privileged scholar could not have dreamed of a few years ago. Medical advances are conquering diseases and extending lifespans. For most of human history, only a privileged few have reasonably been able to hope that the future would be better than the present. Today the masses everywhere can. That is surely reason to be optimistic.’
On a human level, that’s encouraging. Yet Dutch economist Bob Goudzwaard and his co-authors remind us in their book, Hope in Troubled Times*, that our hope for the future is not based on ideologies of materialism and security. Desmond Tutu introduces the book by saying the authors are not optimists but realists. Their proposals are the stuff of political realism, he writes, pointing to the victory over the ideology of apartheid as ‘living evidence that deadly ideologies do not in the end carry the day’.
Themes of hope
Hope in today’s world, the authors argue, is inspired by three themes. The first is the active presence of the Spirit of God in our time, usurping ideologies, bringing reconciliation and healing, and moving people ‘to joyfully commit their lives to assisting victims all around the world, often at great danger to themselves’.
The second theme is the symbol of the cross as the only way to break out of the ‘cramped circles and pinched spirals’ of ideologies. The only genuinely anti-ideological stance, the cross of Christ has delivered the mortal blow to all the powers, Mammon, Molech and Baal, and more.
The third theme is of a hope that comes in the darkest hour of the night as the morning star, the promise of the coming dawn. Jesus’ last words  were:  ‘I am…the bright Morning Star’ (Rev 22:16).
Esther in the Old Testament helps us understand this image, suggests Goudzwaard. Her name means ‘morning star’, and her appearance in the darkness of exile is a sign of daybreak. Although God seems hidden and disengaged–nowhere in the book of Esther is his name mentioned–he works hiddenly through her obedience.
‘We are called to take first steps, small beginning acts of undistorted justice and unperverted love in the midst of powerful ideologies,’ Goudzwaard writes. ‘Even our smallest acts can sometimes mobilize the forces of God’s kingdom in a time of doom.’  We can all be stars of hope!

Perhaps you (if you are under 25 years) or someone you know would like to explore further the theme of hope in English literature by writing a 2000-word essay. You could be one of ten winners of a three-week Literary Tour of London, Oxford and Cambridge next summer, meeting up with outstanding Christian leaders like Chuck Colson, Os Guinness and Vishal Mangalwadi.
The Schuman Centre is co-sponsoring this essay competition along with the C.S. Lewis Foundation and Vishal‘s Revelation Movement.
For further information, go to www.revelationmovement.com/tour_entries/new.

Meanwhile, I wish you a joyful and hopeful Christ-mas!
Jeff Fountain