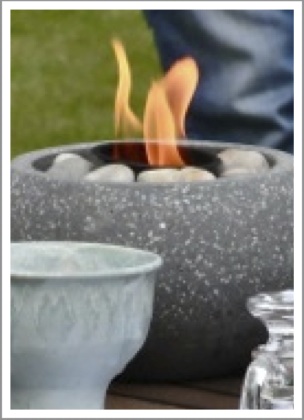 This weekend was the summer solstice. So now the days start to shorten and the nights lengthen– in the northern hemisphere at least. In pre-modern times, Europeans were far more conscious of the rhythms of the seasons than in our modern, industrialised, secular times. The church calendar marked this cosmic milestone as the Feast of John the Baptist.
John was six months older than his cousin Jesus. So when the Feast of Christmas was established on December 25 (in the fifth century) the date of the Baptist's birth was assigned to June 24. (Why not the 25th? That has to do with the Roman way of counting days backwards from the preceding month.)
All over Europe, Saint John's Day festivities are still celebrated, either on the 24th itself or on the summer solstice, as a Christianised expression of ancient pre-Christian mid-summer celebrations. ‘Saint John's fires’ are lit as symbols of the warmth and light of the sun. Dances, games involving jumping over flames and outdoor feasts were and still are typical activities.
The Summer Solstice is a point of balance between increase and decrease. So John the Baptist who comes in Summer says of Jesus the Lord who comes in winter ‘I must decrease that he may increase’.
Contemplation of the meaning of the seasons has not been part of our evangelical or charismatic spirituality, but has been so traditionally in Christianity, and especially so in the Irish Celtic tradition. This coming weekend we start our Celtic Heritage Tour in Dublin, and we will be learning about the relevance of the richness of the Celtic spirituality for us today.
Seekers
I spent this weekend in Sheffield with some thirty practitioners engaged with spiritual seekers who believe the last place they will find spiritual reality is in the church. Such seekers make up a growing proportion of Europe’s population. If we are serious about our mission task we must ask ourselves how to apply standard missiological strategies to engage with them, as if we were trying to connect with a tribe in the Amazon: learning their language, understanding their culture, engaging with their world, looking for communication bridges, affirming the positives in their worldview…
Describing themselves as spiritual but non-religious, spiritual seekers, new agers, the holistic community, or whatever we want to call them, possibly now outnumber Christian believers in many European countries. But they remain largely off our radar in terms of outreach and prayer. Yet the pioneer missionaries coming to Europe – from Paul and Patrick through to Boniface and Willibrord – sought ways to communicate effectively the good news of Jesus to their pagan audiences. Paul for example  quoted from a pagan poet when he told the philosophers of Athens: ‘In him we live and move and have our being’.
While striving to be Jesus-centred and Word-based, my fellow travellers shared a plethora of liturgies, aids and celebrations which could unsettle some people’s comfort zones. After all, many found Hudson Taylor efforts to identify with the Chinese, by dressing like them and growing a pigtail, very threatening.
Fingerprints
Stands at mind, body, soul fairs are creating opportunities to pray and counsel with folk who would never enter a church building. YWAM colleague Jari Koivu told of people lining up for an hour to receive prayer at his Open Sky Cafe stands. Likewise, the recently-developed concept of Forest Church, held outdoors to explore God’s fingerprints in creation attract pagans and seekers searching to connect with nature.
Ruach cards and the Jesus Deck have proven to be tools enabling people to encounter God in new ways, quickly opening up deep spiritual conversations.
Steve Hollinghurst of the Church Army, and host of the ROMBS conference  (Reaching Out in Mind, Body & Spirit) this weekend, led us in a closing communion celebration around a St John’s Fire (see photo). Reflecting on midsummer as a time to welcome the reality of decrease as well as the celebration of fullness, he said that looking toward autumn called for trust that the one who had gifted in creation would not abandon us.
Perhaps the most important lesson we all had to learn from the solstice mid-point, he suggested, was that in the surrendering of our lives we became totally free. We must decrease so he can increase.
Till next week,
Jeff Fountain