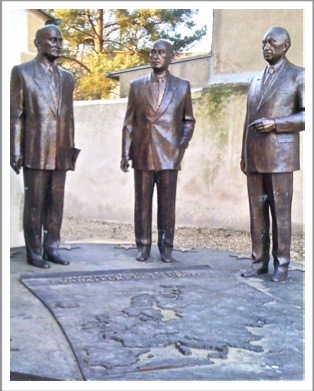 Tomorrow evening in the Chapel of the Resurrection in Brussels, a panel of speakers will address the topic of Robert Schuman’s dream and the future of Europe.

The most challenging part of the evening–the future–has been given to me to attempt to address. Perhaps the organisers reasoned that fools rush in where angels fear to tread. For, as the Chinese say, prophecy is a tricky business, especially when dealing with the future.
My fellow panelists will address Schuman's dream and inspiration–the past (Dr Gary Wilton, former Archbishop of Canterbury's Representative to the EU); and Its presence and effect today–the present (Victoria Martin de la Torre, Press Counsellor in the EU Parliament, author of Europe: A Leap into the Unknown).
So, where Europe is going and how it can integrate Schuman’s vision in the future is my lot to unpack. No easy task.
Thinking about the future is not a strong point for the evangelical constituency–unless we’re talking about eschatalogical speculation.
For we tend to be creatures of short memories. And short memories breed shortsightedness. Too often we have lacked creative vision for the future. Christians have been known as people against this and against that. But what are we for?
Schuman however spent much of the Second World War thinking about the future. His Christian faith guided him in imagining the sort of Europe that would please God, a Europe that would reflect something of God’s shalom, right relationships among the nations, a community of peoples deeply rooted in Christian values of freedom, equality, solidarity and peace.
Visionaries
Far from being idealistic and impractical, Schuman believed this was the only way forward. Only Christianity could give an adequate foundation for democracy, which otherwise would descend into tyranny or anarchy.
Unlike Schuman, his political advisor Jean Monnet was not a believer. Yet he once said this: ‘I have always been a believer in Harry Truman’s saying: where there is no vision the people perish.’
We can laugh at his lack of biblical knowledge. But Monnet had vision for the future of Europe, a vision that has affected every European’s life today. What vision do we who know our Bibles, and can quote Proverbs 29:18 with proper reference, have for our own nations, for Europe?
Of all people, Christians should be visionaries–of the future of Europe, of the kind of society that would please God, that would reflect his Kingdom’s values, and that we would want to bequeath to our grandchildren. Yet too often we have failed our nations. Because of short-memories we have become shortsighted. We have been seduced by short-term eschatologies out of fear of being ‘left behind’.
Sustainability
Schuman was convinced that post-war Europe had to be rebuilt on Christian foundations. Cut off from those roots, Europe would lose the foundations for equality, human dignity, tolerance and compassion. He believed the way forward for Europe was to build political and economic structures at all levels–local, national and European–on the democratic principle of ‘loving your neighbour’ applied to states and peoples.
‘The European Movement would only be successful if future generations managed to tear themselves away from the temptation of materialism which corrupted society by cutting it off from its spiritual roots,’ he wrote the year before his death.
However the neo-liberalism that has dominated in recent years has done just that. The European project is under threat from the selfie-culture we wrote about last week, of individualism, the unshackled market and the invisible hand.
We need to face the reality of the possible demise of the EU as we know it. Jürgen Habermas warns that the result would be renewed political and nationalistic rivalry, followed by Europe’s disappearance from the world stage as co-shaper of the world political order.
The question is, which worldview can offer the greatest promise of sustainability? Secularism tends to produce lifestyles that undermine the long term. Over 60 years ago, Schuman, Adenauer and De Gasperi were convinced only Christianity could show the way forward. We need to follow their example and demonstrate the feasibility of politics, economics and society derived from biblical values.
This is too important to leave to politicians. Which is why we invite academics, church leaders, economists, social and political activists, theologians and all interested parties to think and pray together over Europe’s future next month at the State of Europe Forum in Athens. Will you join us?
Till next week,

The Perspective of Paradox