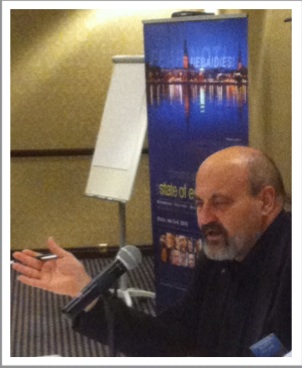 The end of World War Two 70 years ago was commemorated on Friday in London, Paris and Berlin, and on Saturday in Moscow. In Riga, where this year’s State of Europe Forum was being held on these same two days, native Latvians recalled the German capitulation in sober style on Friday while the next day Russian Latvian citizens held a noisy celebration with red-white-blue Russian flags, Soviet insignia and lavish fireworks.
The different dates for the same event stem from the fact that the signing of the capitulation in 1945 took place late Friday night May 8 when, in Moscow further east, Saturday May 9 had already arrived.
Seventy years later, that difference in date carries extra political weight. While the May 8 events reflected the politics of reconciliation which had enabled the rebuilding of western Europe and the emergence of the European Union, Saturday’s events across Russia and some parts of the former Soviet Union were ominous displays of military prowess, the biggest since the war itself.
Boycotted by western leaders due to President Putin’s occupation of the Crimea and covert support for the separatist fighting in eastern Ukraine, the parades were beamed into homes worldwide by RT television with bombastic music and commentary describing the latest advanced weapons, signalling to the world that Russia was back as a superpower.
Reversal
The evening before, in the historic St Peter’s Church in the Old City of Riga, the Czech professor Tomas Halik addressed the opening meeting of the State of Europe Forum with words from the first sermon of the new pope John Paul II, in October 1978: ‘Fear not!’
The professor reminded his audience how that Solidarity, the independent Polish trade union movement, had come into being following the Polish pope’s first visit to his homeland, and represented for world communism a reversal comparable to Stalingrad for Nazism.
The new pope’s first message had meant a great deal to Dr Halik personally, he explained, just hours after having been secretly ordained as priest and before commencing his activity in the ‘underground church’ in Czechoslovakia.
‘Fear not!’ – these words of Jesus and the pope had helped many Christians, he said, to realise that Christian witness also involved accepting political co-responsibility for our world, responsibility for freedom, peace and justice in our societies.
Today not only the countries of Central and Eastern Europe were watching with great concern the attempts of the Kremlin rulers to resurrect the old empire, he continued. The extremely dangerous developments in Putin’s regime demonstrated the need to enhance the political unity of democratic states in Europe. If the dangerous temptation of national selfishness and isolationism were to triumph in Europe, leading to the tragic collapse of the European Union, the nation states of Europe would not acquire greater sovereignty, but instead would be exposed far more to the forces of chaos and destruction from within, he warned.
Opium
Since the fall of the atheistic religion of communism, nationalism and national egoism had become the dangerous opium of the nations. The fact that Putin’s policies had the support of many Russians proved that the main support of the old regime still remained, namely, homo sovieticus, Soviet man. The real strength and weakness of societies lay not in their economic and military power but in the mentality of their citizens.
For the common European home to be a real home, he continued, it needed a ‘spiritual and moral biosphere’. The Communist system in which culture was controlled by ideology had been unable to survive in the free global market of ideas. But, he asked, what would happen to a society whose culture had lost its spiritual dimension and instead was dominated by the commercial entertainments industry?
The former advisor and friend to the Czech President Václav Havel concluded his address stressing that the great project of European unity needed new spiritual strength and intellectual vitality.
The Europe of today and tomorrow needed great Europeans–Europeans of the kind that Karol Wojtyla and Václav Havel had been.
Till next week,
Jeff Fountain