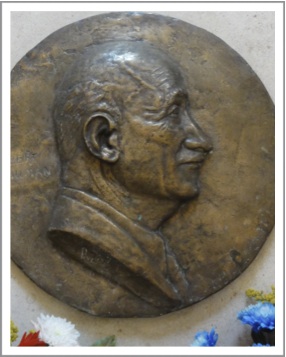 Fifty years ago on September 4, Robert Schuman passed away peacefully in his home in the little French village of Scy-Chazelles near Metz. A few weeks ago on our Continental Heritage Tour we visited the home of the ‘Father of Europe’, and the fortified medieval church of St Quentin across the road, his final resting place where he prayed daily.
A new sculpture of Schuman with three of his most important colleagues, Konrad Adenauer, Alcide de Gaspiri and Jean Monnet now stands in the churchyard opposite his front door. Although each of these men helped ‘father’ the new post-war European project, Schuman’s vision and initiative for forgiveness, reconciliation, partnership and accountability earned him the recognition of ‘Father of Europe’ from the European Assembly, the only person to be granted that official title.
Wednesday is likely to pass largely unrecognised by the European press (I’d like to be proven wrong), unlike Martin Luther King’s ‘I have a dream’ speech exactly a week before Schuman’s death.
Integrity
Unassuming and modest, Schuman himself would not have wanted much fuss made over him. Unlike many of his colleagues, he never sought the limelight. Unlike King, he knew full well he was not an orator: ‘I am not a speaker,’ he readily admitted, ‘I know I will make a bad job of it, so I’m not scared.’
A man of great integrity, he became trusted by friend and foe alike. What you saw was what you got. The Swiss paper, Sie und Er, once described him as being: sober, lean, bald, without illusions, serious but not without a sense of humour, incorruptible, hard-working, deeply religious, a mite quirky, does not quite fit the image of a statesman of the French Republic. He does not even speak very good French. His mother tongue is German and, unlike most of his compatriots, he has absolutely no ear for music. A confirmed bachelor, Schuman admits quite openly that he is intimidated by women. In the Third Republic, he would have been unthinkable. That he is today playing such an important role is symptomatic of the transformation that France has undergone, of how fundamentally modest it has become.
The paper continued: Schuman is not corrupt like so many ministers of the Third Republic, he is not grandiloquent and unbending like de Gaulle, nor does he share the dazzle and wit of Bidault; he is straight and honest—nothing more nor less. A politician who eschews trickery and affectation is a rarity, and an agreeable one at that.
Reconciliation
Little wonder that at his funeral Schuman received more honour from abroad than from his countrymen who saw him as ‘a little too German, a little too Catholic and a little too austere’.
Schuman’s public service flowed directly from his personal faith as he sought to flesh out his Lord’s command to love one’s neighbour as oneself. In international politics, that meant extending forgive-ness and reconciliation, and embracing former enemies as equals. That radical interpretation was the foundation on which the new Europe emerged from the traumatic post-war years.
The museum annexed to Schuman’s house contains a permanent exhibition documenting the development of the European project. Nothing is downplayed concerning the role of Schuman’s faith in shaping his politics. The guidebook states that ‘Robert Schuman’s personality can only be understood if we take account of his religious beliefs. For Schuman, spiritual life and political action were closely linked. ‘
His life-long trust in Jesus is expressed in the verse on the church wall close to his grave ‘I am the Alpha and the Omega…’  (Revelation 22:13)
Till next week,
Jeff Fountain