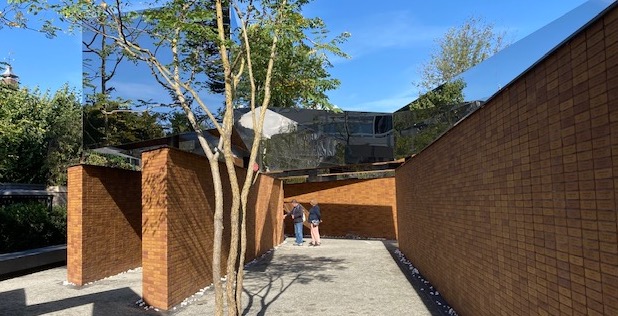 A ten-minute bike ride from our apartment in the centre of Amsterdam a few days ago brought my wife and me to an arresting new memorial in the former Jewish Quarter.

We cycled past the still functioning 17th century Portuguese Synagogue, and the Jewish Historical Museum housed in four former synagogues. Two yellow triangles loomed over the footpath to form a giant Star of David, a stark reminder of the neighbourhood’s grim history.

Just across a bridge over the Nieuwe Keizersgracht, we caught sight of a sharply-angled labyrinth of brick walls and shining stainless-steel surfaces mirroring surrounding trees and buildings. We recognised it as the newly-opened Holocaust Memorial to the Jewish, Sinti and Roma victims of Nazi atrocities. Designed by the Polish-American architect Daniël Libeskind, the memorial’s angular walls form four Hebrew letters, comprising a word meaning: ‘In memory of’.

A year after offering the first official apology for government aquiesence to war-time persecution of Jews, the Dutch premier Mark Rutte recently joined King Willem-Alexander for the unveiling of the Memorial of Names. It is the first memorial naming all 102,000 Dutch Jews, and 220 Sinti and Roma murdered in mass anonymous executions or the gas chambers of Auschwitz-Birkenau, Treblinka, Belzec, Majdanek, Chelmno en Sobibor; or who died as a result of sickness, hunger, exhaustion or slave labour.

Almost eight decades after their extermination, the names, dates of birth and age at death of each and every individual are now inscribed in separate bricks, finally offering surviving relatives a place to remember loved ones.

On the nationally-televised opening ceremony, Rutte declared in the presence of an audience of survivors and descendants, ‘This monument says: No, we will not forget you. No, we will not allow your names to be erased. No, evil does not have the last word.’

The ceremony opened with a string quartet playing a composition called ‘Names’, performed every five years since 2005 on the International National Holocaust Memorial Day, when the 102,000 individual names of Dutch Jewish war victims have been read out loud continuously as a ‘spoken monument’ over six days and nights. Composer Maarten Peters wanted to stress that ‘each and every name represents a unique individual: young, old, father, mother, grandmother, grandfather, brother, sister, cousin, friend…’

The ceremony master was Dutch actor, artist and survivor, Jeroen Krabbé, himself born in Amsterdam during the hunger winter of 1944. He spoke of the houses that stood where the monument now stands, home to a small community of about 200 working class Jews.

‘They were all murdered, anonymously, somewhere far away, without graves, their names blown away in the cold wind. But now their names are back, for good, forever chiseled in stone. We can see them, read them touch them, speak out their names. And that is good, For according to Jewish tradition, one is truly forgotten when your name is no longer spoken.’

To walk through the walls of names confronts one with the enormity of the dramas and traumas sweeping grandparents and grandchildren, parents and siblings, infants and elderly, whole extended families, out of their daily routines into oblivion. Voices nearby exclaimed: ‘And here’s Tante Betje!’.

Each of the bricks represented a living person, someone’s loved one, their daughter, father, cousin, someone who may have walked this very street, played in this neighbourhood, someone created in God’s image.

My thoughts strayed to the Old Jewish Cemetery in Prague where my wife and I visited early in the 1990’s, soon after communism had collapsed. The Nazi occupation of Bohemia and Moravia had led to the deportation and murder of 263,000 Jews. Communism after the war continued a rule of oppression. In the entrance building, we watched with fascination as workers painstakingly calligraphed the individual names of these thousands of Jews, victims of a fascist worldview which sacrificed the dignity of life to power. Materialistic communism had no cause to recover the lost individuality of each murdered person. Only after both godless regimes had passed, could the task be picked up again of restoring the memory of each person.

For the Jewish understanding of personhood and dignity was rooted in the revelation of the Hebrews scriptures, the Tanakh, that every human being had been created in God’s image. By rejecting God we reject all grounds for human dignity and human rights. For if homo sapiens is merelyan unlikely cosmic freak, the product of a chance evolution of slime plus time, from where do the concepts of human dignity, sanctity and purpose come?

The Tanakh, the Bible, is full of peoples’ names. It exhorts us to remember, and not to forget. The Scriptures are the only sacred writings which take history seriously. Thank God for the Jews whose ongoing existence keeps reminding us of God’s hand in history.

P.S. Listen this evening (or later) to Joshua Searle of Spurgeons’ College in London tell of the Ukrainian Revolution of Dignity 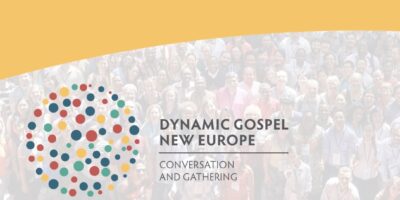 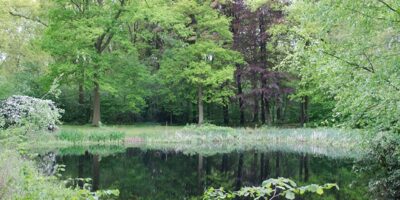