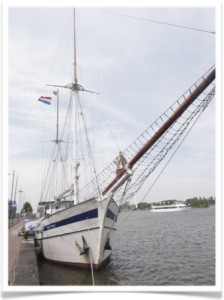 As I sit on the deck of the Next Wave, the 42 metre training and evangelism ketch operated by YWAM Marine Reach, I think about the significant role boats played in the Bible.  The Ark, which became the vessel for humankind’s salvation; the ship of Tarsus Jonah tried to flee on; the fishing boats Jesus preached from; and of course, the boats Paul sailed on as he launched the World Christian Movement.
The Next Wave is presently docked in Kampen, the Netherlands, after brief visits to Rotterdam and Amsterdam. The focus of ministry is evangelism in Europe, usually along the Mediterranean coast of southern Europe. Crew members engage in low-key evangelism wherever they dock. In the home-port of Liverpool, the police  regularly bring problem youth to the boat and ask the crew to spend time with them.
My thoughts wander to the Greek coast, east of Thessaloniki, where a few years ago my wife and I were driving over the hills towards Philippi. As we rounded a curve in the highway, a great panorama of the Aegean Sea unfolded before us looking across towards modern day Turkey, or Asia Minor in Paul’s day.
The island of Samothrace, mentioned by Luke in Acts 16, lay in the far distance, with a faint outline of the Turkish coastline behind it. Ancient Troy–Troas in Paul’s day– lay somewhere on that coast. Paul set out from there after his history-shaping dream in which the Macedonian appealed for him to come over to what we now call Europe and help.
Luke describes how Paul and his party overnighted on Samothrace before proceeding across the bay before us to the harbour of Neopolis where they disembarked.
A shepherd standing on our vantage point may have seen a small sail in the distance making its slow progress towards port. Nothing at all unusual, an everyday occurrence.
Revolution
From Neapolis, Paul, Silas, Luke and whoever else was in the party walked inland to the main centre of the region, Philippi. On the sabbath, they went outside the city to the river–or rather a stream one can still visit today–hoping to meet local God-fearers. As Luke describes it, Paul met a local businesswoman there named Lydia who responded enthusiastically to Paul’s message.
A passer-by would have seen a small gathering by the stream. Nothing unusual, an everyday occurrence.
Yet, from the historical perspective, this short sailing trip and small riverside gathering were the start of the greatest revolution in Europe’s history–the process by which Europe gained her soul.
For in the course of seemingly ordinary everyday events, the first seeds of the gospel were planted on European soil, seeds which slowly but surely spread a message of truth and love to all the peoples groups on the European peninsula.
Razzmatazz
Italian philosopher Benedetto Croce wrote in 1942 that Christianity was the greatest revolution that the human race had ever acccomplished, and that the revolutions and discoveries that had followed in modern times could only be conceived as dependent upon the Christian revolution–all of them. Modern civilisation and thought were the continuation of the impulses given by Jesus and Paul, he wrote.
And yet there was no great fanfare or blaze of publicity, no razzmatazz such as launches a new Apple product. This revolution was quietly effected by ordinary actions of faithful followers of Jesus, empowered with the ‘soft powers’ of Christianity: truth and love.
Jesus spoke of the Kingdom of God as a mustard seed–small yet growing into something large; or as yeast, unseen yet working behind the scenes to influence the whole.
The Europe that is our mission field today may be in a bad shape–but is nowhere near the challenge the ‘Europe’ of Paul’s day was. And yet over time Paul’s mission triumphed.
Let’s take to heart Paul’s words to the believers in that godless city of Corinth: (1 Cor. 15:58)
Therefore stand firm. Let nothing move you. Always give yourself fully to the work of the Lord because you know that your labour is not in vain.