This year’s performances of Johan Sebastian Bach’s St Matthew’s Passion by choirs and orchestras across Europe have an extra dimension of pathos as Ukraine suffers under unprovoked aggression.

Considered one of the greatest musical works ever composed, the sacred oratorio depicts the false accusations, lies and unjustified suffering inflicted on Jesus, ending in his crucifixion and burial. The parallel with the brutal invasion of Ukraine and the unjustified suffering of millions of innocent civilians will not be lost on attentive audiences.

Last Saturday, Romkje and I were invited by friends to the Grote Kerk in the centre of Zwolle for a moving presentation of the oratorio under the direction of celebrated Dutch conductor, Pieter Jan Leusink. For the past decade his lead soprano soloist has been a talented Russian named Olga. On Saturday, we were told, Olga was ‘sick’. However another soloist later confirmed to me that, as suspected, her absence was due to the war.

Earlier that day I had interviewed Hanna Hopka, a Ukrainian political activist whom I first met four years ago as chair of the parliamentary committee for European and foreign affairs. We had then talked for 90 minutes in her office about the Schuman story of forgiveness and reconciliation between the French and the Germans. A devout Orthodox believer, Hanna recognises that Ukraine’s future must be rooted in Christian values, but right now she is fighting tooth and nail for the future of her land as free and democratic. Originally we had arranged to record on Wednesday, but she had to be in Warsaw recruiting military support as she ‘celebrated’ her 40th birthday.

So Saturday afternoon we talked intensively for half an hour as she pleaded for western intervention to relieve the suffering of her people, the mothers giving birth on concrete floors in bomb shelters and the children crying for lack of food and water, terrified by the Russian barrages. Her heart cry went online just an hour before the concert began.

Hanna’s cries for justice and deliverance rang in my thoughts and were echoed in the words of the choir as I followed them in my text book:

The world has judged me deceitfully / With lies and with false utterance, / Many a snare and secret plot./ Lord, guard me in this danger, / Shield me from false deceits.

Kyiv, the birthplace of Ukrainian and Russian Orthodoxy, is presently under siege and bombardment from a Russian army struggling to encircle it. Normal life is disrupted. Daily commerce and public gatherings are shut down. Each day brings reports of tragic civilian casualties.

On Good Friday, 1727, the gates of Leipzig were also closed to all traffic. Markets and public gatherings were forbidden, not because of hostile invasion, but for the commemoration of the unjust and cruel crucifixion of Jesus of Nazareth. That day saw the very first performance of St Matthew’s Passion under Bach’s baton in the Thomaskirche.

Bach was city director of choral music, responsible for the music in the services of the city’s four main churches. Of four, maybe five, Passions written by Bach, only St Matthew’s and St John’s remain, each with different theological emphasis. They were all part of the annual cycle of cantatas, rather than stand-alone pieces. As the Passion narrative in the Gospels are part of the whole story of Christ’s life on earth, so too Bach’s Passions belong to a bigger picture, expressed in music. Yet for Bach, as for Luther and for Paul (We preach Christ crucified–I Cor. 1.23), the Passion narrative and the cross was at the centre of the gospel story.

Descriptions of chants of the Passion story during Holy Week go back to the 4th century. The practice of chanting the whole story from one of the gospels developed in the Middle Ages. Luther, asking why the devil should have all the good music, encouraged the narratives to be put to music. Bach put Luther’s translation of Matthew’s Passion story to music with two antiphonal choirs, a third boy soprano choir, two orchestras and even two organs, as well as the soloists of the main characters.

Bach urged all who heard to consider the guiltless Lamb of God who died out of love for us, the guilty. St Matthew’s Passion is a reminder of the profound impact firstly of the ‘greatest story ever told’ and of how deeply embedded this story remains in European culture, despite secularism’s inroads.

While St Matthew’s Passion ends with the burial of Jesus, the audience – unlike the disciples – knows that it is not the end of the story. It is a Good Friday oratorio. The unrighteous suffering is for a purpose only to be understood later. Sunday is coming.

That too is our prayer for Ukraine. May God redeem the suffering and tragedy, bringing  restoration and resurrection! May Sunday come quickly!

3 responses to “Passion with pathos” 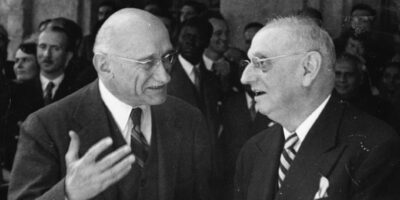 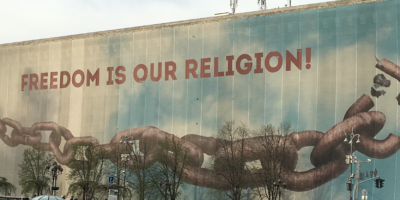