Years ago I shared a couchette with some italians on a train headed north through Europe to Holland. When I asked where they were from, they all  said ‘Bari’ in unision, tapping on their heels. My look of incomprehension caused them to dissolve into laughter. Then I realised what they meant. If the map of Italy resembles a human leg, the port city of Bari is on the heel, on the eastern Adriatica coast.
I spent last week in ‘the heel of Italy’ teaching Discipleship Training School students hosted by a local church. You can’t be long in Bari without discovering its link with one of the most famous saints in history: St Nicolas.
For the last thousand years, the body of the patron saint of sailors and merchants (as well as thieves, archers, children and students) reputedly has been the proud possession of the people of Bari.
Next to Bari, many other cities claim St Nick as their patron saint: from Aberdeen to Amsterdam, Limerick to Liverpool, and Naples to Portsmouth. He seems to have been everybody’s favourite saint: newly-weds and judges to old maids and penitent murderers.
If that sounds like Father Christmas, there is a clear connection. For Santa Claus is the American re-incarnation of St Nicholas. Dutch sailors, who settled Nieuw Amsterdam at the mouth of the Hudson River, established the feast of Sinterklaas, which was anglicized into Santa Claus when the city became New York.

Theft?
The global myths of St Nicholas/Sinterklaas/Santa Claus/Father Christmas have their its beginnings in the third century. Niko-laos (‘victory of the people’) was born in 270 in Myra, southwest Turkey. He became the bishop of Myra, and grew famous for his care for the poor. Many legends of miracle-working and secret gift-giving became attached to his name.
Perhaps his most famous exploit was dropping purses of gold coins through the window and even down the chimney, for the daughters of a poor man who could not afford a dowry.
The bishop died on 6 December 346, a date still celebrated in many European countries with gifts for children.
Bari’s claim to the saint dates to 1087, when sailors ‘translated’ the body from Byzantine Asia Minor to Italy, against the protests of Orthodox monks.
In Bari, this ‘transfer’ was not seen as theft for two reasons. One, Byzantium was about to be taken over by the Muslim Seljuk Turks, and Christian relics needed to be saved from desecration. And, two, Nicolas himself had appeared in a vision saying he wanted to be laid to rest in Bari.
Who could argue against that? 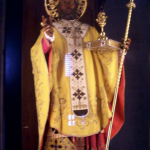 The body of Nicolas arrived in Bari amidst great fanfare on May 9. To this day, his arrival is re-enacted by his relics being carried by boat off the shore of the city until midnight when fireworks fill the air and the boats come ashore. A life-size St Nicholas is paraded through the streets the next day as the city comes to a standstill.
In the great Romanesque basilica built in the 12th century to house the relics, depictions of the saint are strikingly different from most of the church’s saints. Nicolas was apparently black-skinned!
Another striking feature in the basilica is that both Catholic and Orthodox services are held in the same sanctuary. St Nicholas is claimed by both traditions, and Bari is a popular place of pilgrimage for eastern and western Christians. The Russians have built their own basilica in Bari in memory of the bishop of Myra. Even President Putin was among recent pilgrims.
Meanwhile, back in Turkey, the Russians were a little miffed when their gift of a large bronze statue of their patron saint to the modern city of Demre, on the site of ancient Myra, was displaced by a red-suited Santa Claus!
Last Christmas, the Turks for their part decided they should be miffed. They announced they want the body back of the saint whose ministry of generosity has inspired the annual world-wide frenzy of shopping and the December dreams of countless children.
Not for nothing was St Nicholas the patron saint of merchants and children.

Till next week,
Jeff Fountain.