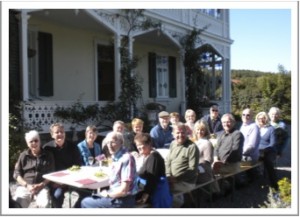 All the ingredients for a great weekend were there: twenty old friends, fabulous Swiss scenery, local food and beverage, share-and-prayer times … as well as a couple of good books on sex. Now that I have your attention, let me explain.

Each autumn, for the past seven or eight years, a number of senior YWAMers no longer in line-leadership have gathered for a weekend retreat in Switzerland. The core group were members of the European leadership team of our mission, and some of us served together in that role for over twenty years.
But where do YWAMers go when they step out of their leadership roles? Well, in Europe at least, some of them go to the Caleb Forum, our annual retreat for mutual encouragement and accountability. Our goal is to spur each other along to ‘finish strongly’. Scriptures give many tragic examples of those who started well but somewhere along the line got sidetracked through power, money and sex. Oops, there’s that word again.
One regular feature of these retreats involves reading and sharing from one or two books together. This year we took time out to discuss Dale Kuehne’s book, Sex and the iWorld, and Guy Brandon’s Just Sex? A third title, Mark Greene’s The best idea in the world, could suggest the same subject, but actually unpacks a bigger framework.

Realities
As came out in our discussion, it was we ‘boomers’, the generation of post-war babies, who embraced the revolution which overthrew what Kuehne calls the tWorld of traditional values, drawn mainly from Greco-Roman and Judeo-Christian civilisations.
We bequeathed to following generations the iWorld, a world of individualism, with all its consequences. Our children and grandchildren have (had) to grow up in a world where boundaries and unwritten rules no longer exist.
Being raised in YWAM communities does not always prepare the young for the rude realities of life in a society where the memory of Christian values has all but completely faded into irrelevancy. Liberalism, individualism, postmodernism and tolerance of everything but absolutes has created a climate hostile to the values we have tried to pass on. Our children and grandchildren can often feel caught between peer rejection and parental disapproval.
Sex is just one area where the goalposts have moved dramatically, or have even disappeared. So what has caused this shift and how can we respond to it?
Kuehne’s thesis is that the tWorld has been changed dramatically by a new perception. This belief holds individual moral and relational choice to yield the greatest happiness and fulfilment, thus producing the emerging iWorld of individualistic behaviour.
The core commitment of this Brave New iWorld, Kuehne argues, is to maximise individual freedom while not violating the rights of others.
Take for example the iWorld’s understanding of gender. Historic gender roles, it maintains, don’t do justice to the actual variations among humans by simply categorising males and females by their genitals. The iWorld ‘embraces new freedoms and discovers new tolerance, rejecting old stereotypes’.
iWorld ethics–and there are some–prohibit criticism of others’ life choices or behaviour (hence ‘political correctness’), as well as forbidding behaviour that causes others harm and demanding consent as the basis for sexual engagement.

Consensus
Brandon, an Englishman, covers similar ground to Kuehne the American, with British references and examples. His core argument is that consensus-based legislation ignores the wide-spread and costly damage to third parties inflicted by sexual relations between ‘consenting adults’; children, spouses, taxpayers and others who were never consulted but end up footing the bill,  psychologically, emotionally, financially and often physically.
Both books make a strong plea for moving on into what Kuehne calls the rWorld. Both the tWorld and the iWorld have disappointed, they argue. Sex is not bad in itself, but alone cannot deliver the fulfilment for which we yearn.
Mark Greene joins the other writers at this point in reasoning that the relational world, the rWorld of love for God and neighbour, provides the basis of finding true intimacy and love. Despite contemporary prejudice, biblical teaching about sex is part of the solution, not the problem.
For if this teaching is true, the iWorld is not sustainable and undermines our spiritual connectedness with others.  And the rWorld then is something worth talking about.

0 responses to “The best idea…”