So, what is your view on European integration?

He’s not alone in his thoughts. If you’re an average European Evangelical, you would share his view: (1) ’it’s too far from my bed’, as the Dutch would put it – never mind if you bought your bed from IKEA (very European!).

Perhaps if we phrased the question differently to ‘what is your view on the European Union?’ you may have some intuitive thoughts, or maybe even a thought-through response. But according to my recent research into evangelical views on European integration, the majority of European Evangelicals do not have a considered opinion.

My research was based on several sources. Firstly, I interviewed twenty evangelical leaders, specialists and academics from western, northern, eastern and southern Europe, drawing from a broad spectrum of church backgrounds, educational institutions and organisations. I asked what they considered to be the views of Evangelicals concerning European integration, and what the main sources of these views might be. Secondly, Weekly Word readers responded to a questionnaire asking similar questions. Thirdly, I reviewed a range of literature – Catholic, Protestant and evangelical – and found significant writings about European integration from the first two categories yet virtually nothing from the third.

The interviews revealed that various evangelical streams had an apolitical legacy of independence, individualism and non-conformism; or had been minorities who had suffered under Catholic majorities or state oppression. Their priority was survival and not sharing the responsibilities of government or the building of society. Revival theology was seen as the answer to social problems, rather than reformational thinking for the transformation of society. Regular intercession for government was offered in very few evangelical/charismatic/pentecostal circles.

If you’re a Brit, chances are you would have thought about it more than the average continental European. You’d have an opinion, shaped for better or for worse by the polarised Brexit debate of recent years, which in turn was shaped by a style of sensationalist tabloid reporting, which in turn was shaped by Boris Johnson’s disingenuous brand of Brussels journalism before he was fired from The Times for dishonesty.

Again, more likely than with your fellow Europeans across the channel, you may have been influenced by those peddling (2) the ‘Modern Babylon’ view of the European Union, featuring the beast and the anti-Christ, supposedly foretold by Daniel and Revelation. Bolstered by the popular American book and film series ‘Left Behind’, portraying a Roman plot to subdue Protestants and to move towards one world government, this view may still be strong in some circles, I was told, but has waned among younger believers.

Or perhaps by the view that (3) national sovereignty was God’s model for the nations, arguing from Paul that ‘God had set the boundaries of the nations’ (although he seems to have changed his mind a lot). Or that the EU should not try to pool sovereignty but rather became a loose intergovernmental confederation of sovereign nations. Yet another version of this option is attractive to those (including some Evangelicals) who embrace illiberal, anti-migrant, nationalistic narratives in the name of saving the nation’s ‘Judeo-Christian heritage’.

Europe as (4) a Community of Peoples, a decentralised federation sharing sovereignty on pan-European issues, scored well in the immediate circles of most interviewees, but not among the more rank-and-file Evangelicals. The term critically-positive was proposed. This option did not imply agreement with all EU actions, for example on migration and refugees, or the Euro-crisis, where EU officials were seen to be acting at odds to the professed EU values.

A (5) Centralised Federation with economic, budgetry, fiscal and political union was overall less popular, despite being the political structure of Germany, Austria, Belgium and Switzerland. In Britain, the term ‘federalism’ has a negative connotation among Evangelicals (‘the f-word’). Yet federal covenant theology derived from Reformed Protestantism and played a major role in shaping the political life and ideas of the colonies of British North America and ultimately the federal United States of America.

So, back to our original query: what would be your choice of the above five options? Perhaps you see other possibilities.

My second question to those interviewed was: What factors do you think shaped these perceptions the most? 1. ignorance, 2. popular eschatologies, 3. serious bible study, 4. news/social media, 5. personal convenience, 6. trusted opinion-makers.

By far the factor most cited by the interviewees was ignorance; not only of the EU and its story, but of God’s purposes for the public square. While in leadership circles there may be more political awareness, there was a rank-and-file lack of interest and understanding.

What does this all imply and what ought we do about it? I have some recommendations and proposals to share next week.

Looking on, doing nothing? 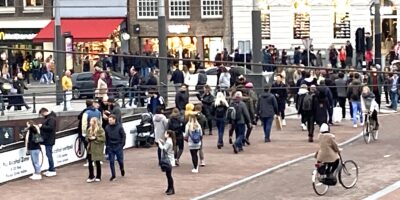