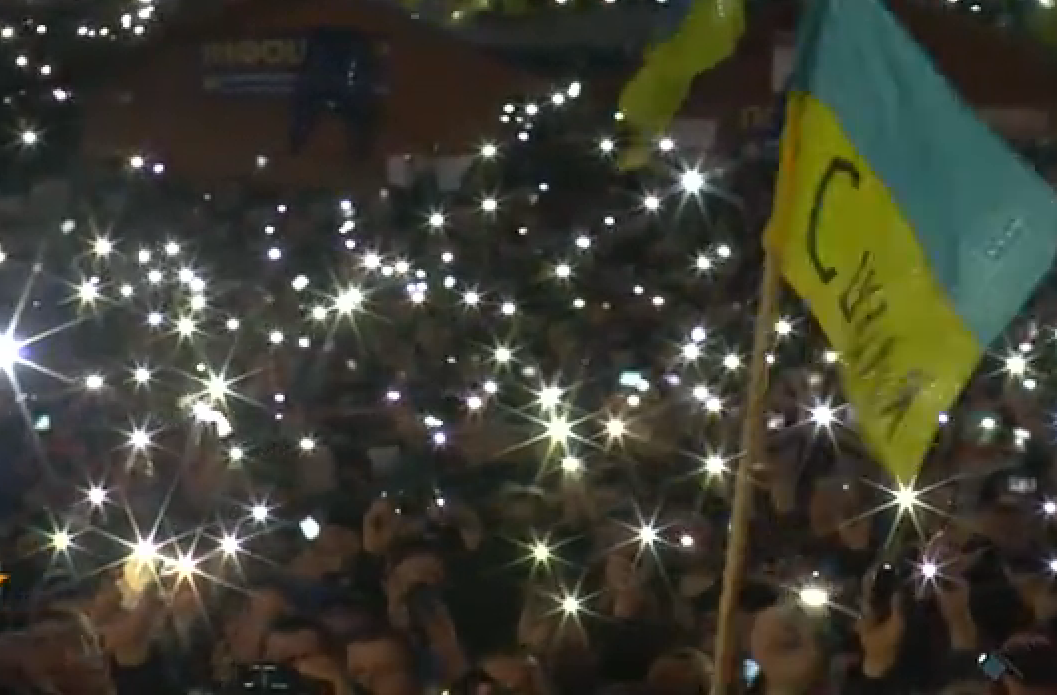 While Ukrainian political leaders talk simultaneously with President Putin in Moscow and the EU officials in Brussels today, Ukrainian church leaders are appealing to Western believers to support their country in prayer as it enters a new critical phase in the tug-of-war between East and West.

Yesterday thousands rallied once more against President Viktor Yanukovich just before he was to leave for the meeting at the Kremlin which the opposition fears will seal their fate on integration with the European mainstream.
On Saturday, the NY Times reported a face-off the evening before ‘between two large, swirling crowds in public squares less than a quarter of a mile apart’ in the capital, Kyiv. The huge, anti-government, pro-Europe demonstration has had a continual presence in Independence Square for the past three weeks since the president reneged on signing an association agreement with the EU. A video clip on the website of Radio Svoboda (Radio Peace) captured the immense sea of hand-held mobile phone lights filling the square, the orderly crowd singing and chanting in unision.
The other crowd of tens of thousands was reportedly bussed in by government authorities for a counter rally to support the president.
The difference in motivation between the crowds was exposed when evening fell and the pro-government crowd disappeared for the night, leaving the police guarding an empty plaza.
Meanwhile, anti-government protesters in Independence Square were preparing for another long, cold, night under the stars, their morale boosted by a rock-band concert.
‘Unlucky’
Just as some commentators saw this contrast as a signal that momentum in the struggle for the Ukraine’s future might be shifting towards the pro-Europeans, an EU official announced on Saturday that work towards an agreement with Ukraine had been suspended. Ukraine’s demands to revise the terms of a possible agreement had ‘no grounds in reality’, he said.
This announcement dashed hopes raised after Catherine Ashton, the European Union’s foreign affairs chief, had earlier said the EU trade agreement would possibly be signed next year.
Friday the 13th proved unlucky for round table talks between the president and three opposition leaders: Olympic boxer and political leader Vitali Klitschko, nationalist Oleh Tyahnybok, and Arseniy Yatsenyuk, from the party of imprisoned opposition leader Yulia Timoshenko. Also three former presidents, including Orange Revolution leader Viktor Yushchenko, joined them for a discussion about the handling of the protests and Ukraine’s relationship to Europe. Yanukovich continued to reject opposition demands for a new election.
While some evangelical leaders resisted further cooperation with the ‘Sodom and Gomorrah’ of the EU, most believed they were in a struggle ‘to stay The Ukraine’, not primarily to join ‘Europe’.
Protection
Others have set up a 24-hour prayer tent in the square. Anatoly Kaluzhny, pastor of New Life Church, posted a video appealing to believers the world over to pray for them in this hour of decision.
‘We are fighting corruption in the government. We look forward to a new government and new life in our country. We encourage all of you to participate with us and support us because it is not easy to stay here during the day and night in cold weather for prayer.
‘I’m so happy to see my brothers and sisters from different churches just to be together and to pray for God to help us to change our government and really bring freedom for the churches, for the people and for new life for our country. Please pray for us.’
Another pastor on the square, Sergey Tymchenko, explained that people had come there not just out of political motives but for spiritual reasons.
Despite the secularisation in Western countries, it was still clear to the pastor that the impact of the gospel on their political and social life had brought freedoms and rights they didn’t yet have in the Ukraine. He and many of his fellow Ukrainians did not want to return to the time of communism, atheism, empty religion  or a new form of Russian czarism.
‘We would ask all churches around the world, please pray with us,’ pleaded pastor Lauzhny. ‘Please stand with us in the gap for Ukraine. We need your help. We need God's protection because it's just one step away from blood.’
Till next week,
Jeff Fountain