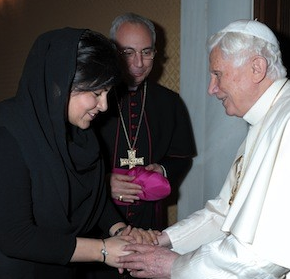 A German Pope in Rome and a Muslim baroness from Britain teamed up last week as unlikely allies against ‘militant secularisation’ in Europe, including Britain.
Pope Benedict XVI spoke of threats from ‘aggressive forms of secularism’ when he visited Britain in 2010. Last week, Britain’s first female Muslim cabinet minister, Baroness Warsi, echoed his words on a visit to the Vatican.
Prior to her trip, the baroness had expressed alarm at a ‘militant secularisation’ she saw taking hold of British society. She cited examples of this trend in a newspaper article as when religious symbols could not be displayed or worn in government buildings; and where religion was sidelined, marginalised and downgraded in the public sphere.
Europe needed to be ‘more confident and comfortable in its Christianity’, she asserted in a statement that surprised many.
"You cannot and should not extract these Christian foundations from the evolution of our nations any more than you can or should erase the spires from our landscapes," wrote the baroness, who is also chairman of the British Conservative Party.
Confident
For a more just society, people need to feel stronger in their religious identities and more confident in their creeds, she claimed. In practice that meant individuals not diluting their faiths and nations not denying their religious heritages. Such militant secularisation was at its core deeply intolerant, she asserted, and demonstrated similar traits to totalitarian regimes by denying people the right to a religious identity.
“Secular fundamentalists are saying that people of faith shouldn't have a voice in the public sphere,” said the baroness in Rome. “I'm saying faith should be one of many voices, it should be part of the debate."
While the liberal elite were ‘well-intentioned‘, she conceded, they were trying to create equality by marginalising faith in society.  The path of faith-neutrality as the route to religious pluralism downgraded religion to a mere subcategory in public life, she warned. Faith and reason were not incompatible, she said in Rome. Rather they went hand in hand ‘as the Holy Father has argued for many years’.
Spirituality should not be excluded from worldly matters any more than reason should be excluded from debates about faith, she insisted.
Debates about the place of faith in the public square are taking place all over Europe with local variations. As if to highlight the concern of the pope and the baroness, Swiss media this past week stirred up a storm of protest against an article by Olivier, a YWAM leader, written in response to a new Swiss school sexual education programme. He had been shocked and disturbed by his son’s report of the programme. He objected to the lack of values, lack of parental or teacher supervision, and the lack of choice for children not to participate.
National press coverage aggressively attacked Olivier’s conservative family values and his Christianity. Comments responding to online articles included more personal attacks, and suggested his children be taken away from him for questioning sodomy as a healthy way of life.
‘Neutral’
In Holland, political observer Gert-Jan Segers commented on the increasing agitation from a secular majority about faith-based education. That children should be raised with an exclusive faith was for secularists objectionable. It was a question of time before the baptism of children, Christian upbringing and Christian school education would come under further fire, he warned.
The new myth of a ‘neutral’ upbringing and ‘value-free’ education needed to be unmasked, he urged. Upbringing in which no beliefs could be taught was as if you did not speak with a child for 18 years, so that they could choose their own language after that! The question was not if the parents should teach their values, but which values they should teach, he wrote.