What is freedom (for)? 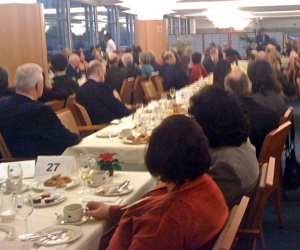 A fundamental rethink of the idea of freedom was needed today, twenty years after millions of East Europeans had been freed from oppressive government. André Rouvoet, Holland’s Deputy Prime Minister, told this to an audience of leaders from politics, church and business last week in Brussels at the European Parliament Prayer Breakfast.

He recalled a comment from a well-known media personality in Holland who had fled from Czechoslovakia in 1968. Expecting to see happy people celebrating their free existence in the Netherlands, instead he saw ‘gloomy faces’, as if nobody really enjoyed being free. “It was like they wanted more of something they already had.”

The question still puzzling the former Czech even today was: ”What exactly is freedom?”

A very good question, said Rouvoet. For many saw freedom as the maximization of the individual right to do whatever you liked as long as it didn’t harm the rights of your fellow citizens.

The good side of this idea was the guarantee of political and economic freedom. The downside was that we seemed to had forgotten about the purpose of freedom. Western lifestyle was about ‘buying things we don't need, to impress people we don't like’, said Rouvoet.

This was also true for our economic life on a larger scale. The exaggerated pursuit of profit and of consumption had caused the current global financial and environmental crises.

On the political level, freedom was also threatened by absolutization of individual rights: the right to insult, or the right to ‘equal treatment’, which forbade religious organizations to hire staff with the same convictions only.

The liberal idea of freedom as maximizing individual rights offered only a negative concept of freedom. It led to a sense of purposelessness, he said.

So, our understanding of freedom needed rethinking: what was freedom for? Rouvoet asked if we could find a concept of freedom that served our economic needs instead of our greed; that enjoyed Creation instead of exhausting it; that honoured our neighbours, instead of hurting their deepest feelings; that listened to the voice of minorities instead of silencing them; and that defended the rights of others instead of trying to confine them.

Paul, he offered, wrote about such freedom to the Galatians: “You were called to be free. But do not use your freedom to indulge the sinful nature; rather, serve one another in love”. (5:13)

Yes, a man was meant to be free, but for that he needed to escape from self-centeredness. This was the missing link, said Rouvoet, the blind spot in the widespread negative concept of freedom. This was why Western culture tended to get off the right track, and did not enjoy the fruits of real freedom.

The Ten Commandments taught Israel about the good life. Yet to modern ears, it was hard to understand that the law was not a moral cage full of restrictions, but the path that led to freedom.

Unless we stopped telling ourselves the lie that we were born to be autonomous individuals with the right to do whatever we wanted (a lie that justified our self-centeredness instead of redeeming us from it), our society would not be on the road to freedom but on the road to social degradation and even planetary self-destruction.

Rouvoet also stressed the role of government officials as ‘servants of God’ (Roms 13), giving no room for totalitarianism. The separation of Church and State was a genuine biblical insight, but did not mean that government could be morally indifferent or neutral. Freedom of society was best guaranteed when government refrained from interfering in societal spheres. Only if people acted against the norm of public justice, should government intervene in the sovereignty of a sphere.

Our voice in the public arena would be more effective, suggested Rouvoet, by showing compassion rather than judgment, and by putting the interest of others in the first place. We had to make it very clear why our ideas and proposals would make our society better off.

Our personal lives should be freed from self-centeredness. Only then could we be what Paul called ‘living letters’, telling others about the love of God, and the freedom that living in relationship with Him could bring.

Then, as followers of Jesus, we could start a conversation about ‘real freedom’ for Europe, Rouvoet told the gathered leaders..