Who the heck was George?

YESTERDAY, APRIL 23RD, WAS ST GEORGE’S DAY. BUT YOU KNEW THAT, DIDN’T YOU? That’s his cross on the English flag, red on a white background. St George’s Cross is the backbone of the Union Jack, which in turn embellishes the flags of many British Commonwealth countries including Australia, New Zealand and Fiji.

So who was this George? And what did he do to deserve a place of honour on so many flags; and the passionate support of millions of English football fans? Few Englishmen could even tell you who the poor fellow was!

The English, however, are not the only ones to lay claim to George. At the eastern end of Europe, he’s the patron saint of Moscow, and the namesake of Russia’s Georgievsk. Not surprisingly, he is also patron saint of Georgia, further south in the Caucasus, where every second male seems to be named George! The new Georgian flag resembles England’s, with four small St George crosses added. In Romania recently, alighting from my train I was greeted by advertisements for St George cigarettes, emblazoned with the familiar red-on-white cross.

At the western extreme of Europe, St George’s Castle has guarded Lisbon for centuries on behalf of the city’s patron saint. Several Italian, Greek and German cities also enjoy his patronage. And on no less than thirteen official Swiss flags, St George is shown slaying his famous dragon. Not to mention flags and coats of arms in Croatia, Slovenia, the Czech Republic, the Catalonian city of Barcelona and Aragon in France!

While six English kings and three American presidents have borne the name ‘George’, it’s origins were very humble. In Greek Giorgios, it literally means man of the earth, a tiller of the soil, a peasant farmer.

Our particular George, however, entered history in the early fourth century. According to the Byzantine Metaphrastes, his mother was Palestinian and he was born in Cappadocia, modern Turkey. George had a successful military career under Emperor Diocletian. When however the emperor began to persecute the church, George dared to oppose him. He may have been the soldier who publicly tore up the emperor’s edicts against the church in 303AD, mentioned by Eusebius. Overnight he became a hero-and a martyr!

From here on, everything we hear about St George is about as authentic as The Da Vinci Code! Frankly, a lot of silly nonsense has grown up around this figure. In what may be an adaptation of an old semitic myth about the god Tammuz, Oriental churches developed the story that George was killed and was resurrected seven times. This same George of the seven miracles appears in Islam as Gherghis or El Khoudi.

What most people ‘know’ about George is that he slew a dragon about to devour a princess, an old Indo-European myth. This legend was picked up and popularised by crusading knights, hence the widespread adoption of the hero-soldier across Europe. One of the earliest occasions where his help was invoked in battle was when Godfrey de Bouillon and his knights assailed Antioch in 1098, en route to Jerusalem. Success there inspired the belief that George was an indispensable war ally!

Before the Reformation, one believed that saints could be invoked to intervene in human affairs, much as the old pagan gods had been. England had already observed April 23 as St George’s Day for more than a century when in 1344 Edward III led his troops into battle against the French at Calais, calling for the saint’s help. Thus inspired, the English routed the French, and George received much of the credit. Pope Benedict XIV then declared George to be England’s protector.

Around this time George took over the red-on-white cross symbolism previously associated with Michael the Archangel, slayer of that old dragon the Devil. Even after the English Reformation, George maintained his patron-saint role. Today his cross still flutters over Anglican churches the world over.

Thank God then for the Reformation that cut through so much of the accumulated clutter of Europe’s history and tradition! The Reformers pointed back to the central gospel truth that only Jesus Christ is deliverer and champion. Only through His cross are we saved! And only He is the mediator between man and God. 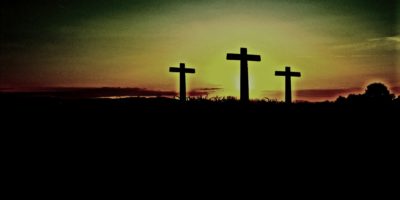