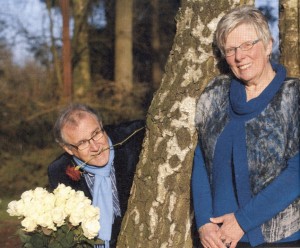 Thanks to some guy named Valentine, the cash registers are ringing up sales of greeting cards, chocolates, roses, lingerie and perfumes this week all over Europe and beyond. Not a bad business, in both senses of the word.
Few would be able to tell you who this Valentine was, however. Maybe some casanova or loverboy from ages past?
Actually, no.
Valentine’s story was no more romantic than that of the thousands of Christians who have been killed, wounded or forced to flee for their faith in Egypt in the first ten months of the Arab Spring (more than during Mubarak’s 30-year regime). For the unfortunate Valentine was an early Christian martyr, executed by Roman Emperor Claudius II. Sentimental but fabricated glosses have been added to his story in more recent times to link his name with the celebration of romantic love.
Thanks to some guy named Geoffrey in the 14th century,  Valentine’s burial day, February 14, has become a global festivity of passion. Chaucer, famous for his Canterbury Tales, wrote a poem on the first anniversary of the royal enagagement between the King Richard II of England to Anne of Bohemia, both only 14 at the time! Chaucer linked the engagement date with the saint’s day, which in turn coincided with the beginning of the natural mating season:
For this was on seynt Volantynys day Whan euery bryd comyth there to chese his make.
["For this was Saint Valentine's Day, when every bird cometh there to choose his mate."]
Investment
Now thanks to another guy named Richard (British, but not a king), the whole week leading up to Valentine’s Day is being celebrated in 16 countries as Marriage Week, encouraging couples to invest time and attention into their relationship.
Former YWAMer Richard Kane was standing at the cash register in a home improvement centre and observed the large amounts of money couples were spending on improving their homes. How much were they investing in their relationships? he wondered.
That thought became the driving force behind a movement that began in his native England in 1996 before spreading across the channel to Germany, Switzerland, the Czech Republic, Holland, Hungary, Belgium and Ireland, as well as across the Atlantic Ocean. Richard’s goal is 75 nations by 2021.
If you are fortunate to be in a marriage, you should look after it, Richard told a conference of YWAM leaders near London last week. He had just launched this year’s event in the Houses of Parliament, and was heading off to Brussels to talk with members of the European Parliament. Earlier he had addressed American congressmen and spoken at the White House Prayer Breakfast for the Marriage Week inauguration there.
Richard’s idea was to encourage all sorts of activities, articles and attention focusing on the strengthening of the marriage relationship. Divorce is costing British taxpayers £7 billion each year. Its good sense for governments to invest in good marriages, he argues.
Consequences
Our last weekly word reported on Professor Govert Buys’ thesis that the Christian concept of ‘love’ fundamentally shaped Europe’s past. Richard is convinced that marital love, nurtured by time and attention, can continue to shape a much better Europe.
Over the past months I’ve been living with the preparations for Marriage Week in Holland. My wife Romkje is the project coordinator. The committee commissioned an independent bureau to research the consequences of divorce. The results showed that children of divorced parents were twice as likely to experience divorce themselves, and were also twice as susceptible to psychological problems.
This prompted a Christian member of parliament to ask in official question time if the government was prepared to make marriage courses tax-free, as are divorce costs. Also the secular weekly, Elsevier, ran a six-page cover story announcing that marriage makes one healthier, happier and richer!
Thanks to some photographer named Gert-Jan, this Jeffrey had to do all sorts of silly poses for a photo to accompany an interview with my wife, published in a national television guide.
What one does for love!

0 responses to “How love still can shape Europe”