What Europe needs right now is statesmen or -women, leaders with vision beyond national interest and who share a vision of Europe as a true community of peoples, with spiritual dimensions. Someone like, well, Jacques Delors. 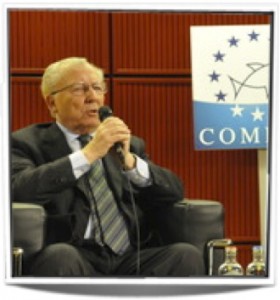 In the 1980‘s, the ‘European project’ threatened to run out of vision, energy and direction until Delors emerged to inspire his colleagues towards ‘ever-increasing union’ and eventually to adopt the Euro.
I remember reading reports of how after the Frenchman took office, he went with his closest associates on a retreat, shared with them his vision and launched a remarkable term in office as President of the European Commission (1985-1994), creating a new sense of momentum and purpose.
His last act as president was to gather religious leaders and challenge them to help rediscover the soul of Europe. In 1992, he warned, "If in the next ten years we fail to give Europe a soul, a spiritual meaning, European integration will be over."
Today we’re holding our breath wondering how we will survive the latest string of Euro-crises. Is this what Delors had warned about?
Now in his mid-80’s, Delors recently revisited Brussels as guest of the European Bishops Conference comece*. There he admitted that it was “with pain in my heart” that he saw the rise of populism, nationalism and individualism in Europe, both in society as between the various member states.
The general atmosphere in Europe resembled those young people who say: ‘I’m going to determine my own future.’
Why do leaders of member states return after talks in Brussels and boast they had won? he asked. It’s a crazy family if you just want to beat others, he added.
Simplistic
This trend had everything to do with the decline of Christianity, he believed. While the Christian faith encouraged openness towards others, not exclusion, populism presented a simplistic understanding of complex issues, labelled minorities as scapegoats and undermined solidarity in society.
Delors also expressed his lingering disappointment with the rejection of any reference to Christianity in the proposed EU constitution.
“People without memory have no future,” he remarked. Christianity had played a key role in Europe, and must continue to do so, he told the bishops.
That said, however, Christianity could not make exclusive claims on Europe, he warned. Europe should not been seen as a kind of Christian club set apart from the Muslim world, he argued, disagreeing with those who wanted to exclude Turkey from the EU.
He reminded his audience that the EU’s founding fathers–men like Robert Schuman, Kondrad Adenauer and Alcide de Gasperi–had wanted more than just economic cooperation in Europe. Their goal was a Europe with intellectual, political and also spiritual dimensions.
In an interview with Marc Janssens of the Nederlands Dagblad after his talk, Delors reiterated that the crisis in society was linked with the decline in influence of the church.
“We see that on a spectacular level in the Netherlands,” he told the Dutch reporter. That crisis became visible at the beginning of the nineties, he said, but since then especially, politicians have only thought of building Europe in terms of economics.
Vision
In his opinion, Europe needed a spiritual incentive, an ideal, a vision for the future inspired by religious and Christian values.
When asked what contribution churches could make, Delors referred to the significant contribution they had made to the heritage of Europe in the past. The current crisis obviously had moral dimensions, he said, resulting in individualism, lack of vision and the dictatorship of the moment. The decline of Christianity translated into fear, rejection and breakdown of communication, he added.
“We see this also in your country,” he told the Dutchman.
The bishops issued the following statement:
• We recall that populism is the very opposite of the European idea, which has its roots in the notion of solidarity.
We regret that even some Christians are tempted to follow these trends. Populism is truly incompatible with the universal vocation of the Church.
We realise the uncertainty and insecurity of the present time. Yet we call upon Christians to resist the pull of populism and to swim against the tide: the Gospel calls us to do this today as it did former generations. Not in order to engage in a battle of cultures or ideologies, but rather to lay down the principles that are at the root of everything: the steadfast dignity of every human person – as so loved and wished for by God – and the common good, which reminds us time and again to show solidarity and to love our neighbour.
To which I say a hearty amen!