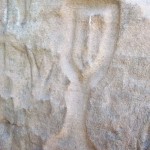 Next time we come to the communion table to partake of both the wine and the bread, let’s spare a thought for Jan Hus. For he and his followers, the Hussites, paid the price for believers over the past six centuries to partake of both the bread and the wine.
It’s hard to believe, but for most of church history, only priests were allowed to drink ‘the blood of Christ’. Events and movements centred around Prague starting in the fifteenth century opened communion for full participation for Protestant believers after the Reformation. Catholics would not be granted that privilege until the Second Vatican Council in the 1960’s.
Such events however receive scant attention in most treatments of church history. These often ignore the Czech Reformation, triggered a whole century before Luther began to shake the foundations of the medieval Roman church.
Even before we headed south from Herrnhut in Germany towards Prague on our Heritage Tour this week, we had been confronted with the story of the Czech reformer Hus. For that little town, nestled in the corner of Germany a stone’s throw from both Poland and the Czech Republic, had been settled in 1722 by spiritual descendents of Hus fleeing from the persecution of the Counter-Reformation.
Mockery
After Hus had been burnt at the stake in 1415 following a mockery of a trial, his followers had organised themselves into the first ‘protestant’ church as early as 1467. In fact, up until 1620, Prague was overwhelmingly Protestant. The Lutheran and Calvinist worlds were simply ‘catching up’.
The chalice, or communion cup, symbolised their ecclesiastical emancipation and was depicted on buildings, banners and books. The Romanesque medieval church of St Martin in Prague, the site of Hus‘ first sermon as a Catholic priest, also was where communion ‘in both kinds‘ (Latin: sub utraque parte) was first served to the people, as sanctioned by Hus in 1415 from his prison cell in Constance.
After the execution of their popular preacher, which greatly outraged the people and the Czech nobles, the king allowed this utraquist communion to be served at more churches around the city. Still officially part of the Roman Catholic Church, the Utraquist Church was on a path to a separation formalised in 1467. The Archbiship of Prague sided with the Utraquists, as did the theological faculty of the University of Prague.
The situation changed drastically in 1620 during the religious wars following the Reformation, after the Catholics won the Battle of White Mountain (now a suburb of Prague) and took control of the region. As Jesuits now took over many institutions in the city, Hussites were forced to recant, flee, go underground or face torture and death.
Those who went underground found secret places to gather and worship–and celebrate communion ‘of both kinds’.
Labyrinth
Our first stop in the Czech Republic was a  natural labyrinth of rock known as Kalich–chalice–not far from the northern city of Liberec. After a climb into the hills by car, we then continued on foot following a marked trail, clambering over, under and around giant rocks balanced precariously on each other. Finally we came to the place marked on our map as Kalich, where a chalice was carved into the rock, with the date 1634.
This symbol of equality before the cross identified the covert gathering place for the Bohemian Brethren, also known as the Unitas Fratrum. As we now stood around this rock and sang a hymn, we tried to imagine what it would be like to be robbed of the freedom to worship, let alone to fully partake of the communion elements, things we simply take for granted.
A few hours later in Prague’s historic Old Town Square, we gathered once more by the large sprawling bronze statue of Jan Hus surrounded by suffering followers, including a priest raising the chalice for all to share. This reminder of the defining moment in the nation’s story was constructed through gifts from the Czech people in 1915, despite the hardships of the First World War, on the 500th anniversary of Hus’ martyrdom.
It’s creator wrote: The Hussite uprising was the first great revolution in which humanity threw off the insufferable yoke of medieval religious despotism. Through his martyrdom, Hus purchased freedom of conscience for humanity.
Till next week,
Jeff Fountain