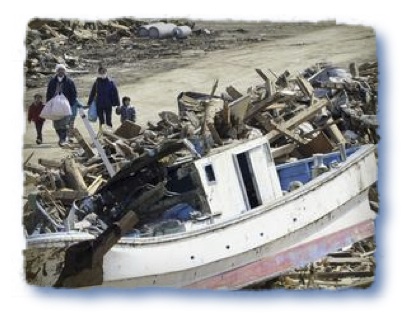 The surrealistic scenes from Japan we have been watching on our screens, hard on the heels of the Christchurch disaster, seem simply apocalyptic–even from the ‘safe’ distance of Europe. Although the experts tell us there is no natural connection between the earthquakes of the last two weeks and the Shinmoedake volcano now erupting in the south-west of Japan, we are left wondering what is actually going on beneath the earth’s crust.
A decade ago, a New Age friend warned me that Mother Earth was angry with how humans had been abusing her, and that we could expect an increase in natural disasters in the near future. No doubt she feels justified today in her prediction.
Many Christians these days will be mindful of Jesus’ Olivet Discourse, as recorded in Matthew 24, or Luke 21 or Mark 13. There Jesus talked about wars, famines, persecutions and earthquakes, after the disciples had asked him about signs of the end-times.
More than a few sermons were probably preached this weekend on this theme. I suspect this passage has often been read as a sort-of Christian horoscope, to discern how close we are to the end. But I fear we may miss the main thrust of what Jesus is saying here if that’s how we read these chapters.
Let’s take a look at the setting of this passage. In the last week before the crucifixion, Jesus is sitting with the disciples on the Mount of Olives, looking out over Jerusalem City with the temple rising above the city walls and gates.
His disciples are agitated and confused. Jesus has just predicted the destruction of the very building which had inspired nationalistic pride and hope among the Jews!

Impulsive
So they whisper among themselves asking what Jesus could possibly have meant by talk of such destruction. How could this be so? Wasn’t the Messiah coming to restore Israel’s glory, and to usher in a new Golden Age when the nations would come to Israel’s light?!
Maybe it was an impulsive Peter who blurted out the question on everybody’s mind: “Tell us when will this happen, and what will be the sign of your coming and of the end of the age?”
Perhaps I’m out to lunch, but it seems to be consistent with the scarlet thread of Scripture, and with God’s purposes revealed in both Old and New Testaments, to insist that God will not wrap up history until he has fulfilled his promise to Abraham that all peoples will be blessed with the knowledge of himself.
So, here’s my paraphrase of what Jesus said. I can imagine Jesus shaking his head after the disciples pose their question, and thinking to himself,  ‘Hmmm, I know the sort of paperbacks you guys are reading–written by those sensationalist apocalypticists about end-time disasters.’

Warning
So he begins with a strong warning.: ‘Watch out! Don’t get led astray! Don’t preoccupy yourselves with speculations. Yes, there will be wars, famines, persecutions and earthquakes–these things must happen. But that’s not yet the end. False messiahs will come and go. So watch out! Don’t be deceived. Be on your guard. Don’t get sidetracked.’
According to Matthew, Jesus finally gives the one end-time sign in verse 14: ‘this gospel of the kingdom will be preached in the whole world as a testimony to all the nations, and then the end will come.’
Here is the only place in the whole Bible where Jesus utters these words: ‘and then the end will come.’ So what needs to happen first? The gospel of the kingdom has to be brought to all peoples.
In other words, Jesus tells his disciples–including us today–that the main thing is to keep the main thing the main thing. That is: all peoples must be reached.
Although that goal is closer than ever, globally, 340 million people do not have the Bible in their own language.  While Bible translation is progressing at a more rapid rate today than ever before, Wycliffe Bible Translators remind us that there is an overwhelming amount of work yet to be done. Over 2000 languages still have no Bible translation.
Even in Europe there are 73 languages with no translated Scripture, according to Wycliffe. At HOPE•II, the Ethne consultation will focus on strategies to close this gap. (see www.hfe.org)

The new media & the good news