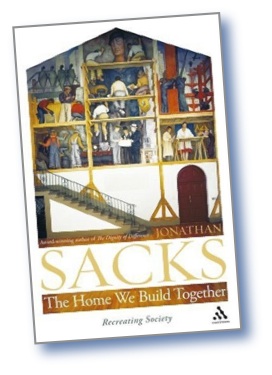 One of the biggest challenges we face in Europe today is how to bring religious and secular Europeans together, with clashing systems of belief, into a cohesive and harmonious society. How can we shape a society that respects cultural and religious diversity yet promotes civic equality, social cohesion and a sense of the common good?
These are questions raised by Sir Jonathan Sacks, Chief Rabbi of the British Commmonwealth, in a book I have found very helpful when recently speaking on issues of church and society.
As a leader of a small religious minority in Britain, a leading moral voice in the nation and an influential partner in inter-religious dialogue, Sir Jonathan brings a refreshing application of biblical insight to the public square.
Sacks has produced a string of significant titles including The politics of hope, Faith in the future, and The dignity of difference.
Some time ago I came across another title in a second-hand bookstore off Trafalgar Square in London: The home we build together.
Scanning the contents page in the store, one chapter heading in particular caught my attention–A forgotten political classic–and persuaded me the book was must-reading.
The classic referred to was the most influential book to shape the idea of a free society at the birth of modernity, Sacks argued.
“It was the proof-text for Milton, Hobbes, Locke and the founding fathers of America,” he continued. It was a key document for the radical Tom Paine, he added, as well as a text that fascinated Jean-Jacques Rousseau, the inspiration of the French Revolution. It was a book that Hobbes quoted from 657 times in his influential Leviathan.
Ignored
That classic, Sacks revealed, was the Hebrew scriptures, the Old Testament, almost completely ignored in political studies courses today. Far from being out-dated and irrelevant, he suggests, those scriptures still hold the key for the challenge we face today of building a place of belonging for Europeans of all faiths and none.
The Reformation began the break-up of the Holy Roman Empire and dismantled the hierarchical feudal system, creating the need to find a new order of political structures. Israel of the Old Testament became the model for the Protestant nation-states which emerged out of the confusion of the religious wars.
A compromise formula was agreed upon between Catholics and Protestants at the Treaty of Westphalia in 1648: ‘As the prince, so the religion’.
Each state would be homogeneous in religion, depending on the faith of the reigning power: Lutheran, Catholic or Reformed. Tolerance for dissenting minorities took much more time to emerge.
This Sacks calls the ‘country club’ phase of European society: each state was made up of the same sort of people, assimilated into one identity.
Over time, church and state became separated in many European countries, and religious freedom became an accepted European value. With increasing secularisation on the one hand, and the influx of non-European migrants on the other, the notion of ‘multi-culturalism‘ became prevailing wisdom: no culture was any better than another, and all should learn to live side by side.
Yet, laments Sacks, this has led to the ‘hotel’ phase of European society, where different communities live under the same roof, as it were, but without social cohesion–like hotel guests passing each other in the lobby.
Covenant
Sacks calls for a return to the ‘forgotten political classic‘ to discover the key for creating society as a ‘home’, a place of belonging, of unity with diversity, respect and common values of freedom, equality, solidarity and peace. That key, he proposes, is the biblical concept of covenant which laid the foundations for early nation-states such as Switzerland, Scotland, England, The Netherlands, and the United States–‘in fact, whever Calvinism or Puritanism was present in the public domain’.
Covenant is about identity, as opposed to contract which is about interests. Covenant involves loyalty, and creates cooperation while honouring difference. Covenant reminds us that someone else’s rights are our responsibilities. Covenant is opposed to postmodern detachment, where loyalty and commitment cease to exist.
Building a ‘home’ together requires communities to covenant together to seek the common good, to identify common values and to live in respect and harmony.
That’s not the task of the state.
That’s our job.
Till next week,
Jeff Fountain

From under the rubble