Last Friday. in Britain and in many of her former colonies, Guy Fawkes night was celebrated with fireworks and bonfires, recalling the abortive effort by Catholic ‘terrorists’ to blow up the British Parliament over four hundred years ago.

The Australians wisely abandoned this annual event over thirty years ago but it is still mindlessly observed around the world, including in my motherland New Zealand. I remember as a kid stuffing old pyjamas with straw to make an effigy of the poor Guy to throw on the bonfire. Surely its time to move on from some parts of our history!
Having said that, the fireworks were always a lot of family fun. One of our favourites was the Catherine Wheel, a small disc-shaped firework which we nailed on a post before lighting the fuse. The result was a spectacular wheel of fire (see photo) lasting about 30 seconds. 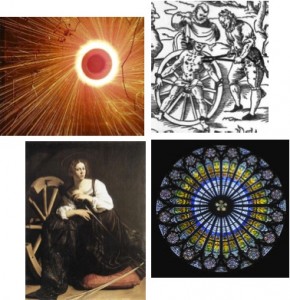 As to who the ‘Catherine’ was, we never spared a moment’s thought.
We did on Saturday however, in Utrecht here in Holland. On our first of several historical trails as part of the Evening School of European Studies, a group of us walked around the centre of this 2000-year old city in search of Europe’s soul. Utrecht was built around an old Roman fort and our starting point was a cafe basement built on Roman arches.

The Great Martyr
Every Dutch person is familiar with the name of ‘Catherine’ lent to a large shopping centre built over Utrecht railway station: Hoog Catherijne. Yet few know who this Catherine was. It happens to be the same Catherine of the wheel fame.
One of 28 convents and cloisters inside the city walls of Utrecht in the Middle Ages, the Catherijne Convent is today a museum and used to be located where the shopping centre is today.
The convent in turn was named after an amazing Egyptian woman who lived in Alexandria in the early fourth century, venerated by both the Catholic and the orthodox Churches as Catherine of the Wheel, or The Great Martyr Saint. The daughter of a pagan governor of Alexandria, a major centre of the Roman Empire, she vowed only to marry someone who was more beautiful, intelligent and wealthy than she. Later when she encountered Christ and discovered his beauty, intelligence and wealth, she chose to be ‘married only to Christ’.
She tried in vain to disuade Roman Emperor Maxentius from his ruthless persecution of Christians. She did  succeed however in converting the empress, as well as a number of pagan philosophers sent to confound her, all of whom were subsequently martyred.

Beheaded
Maxentius threw her in prison. When she persisted in converting her visitors, she was condemned to death on the torturous breaking wheel.
This cruel method of torture and execution involved tying the victim to a cartwheel and inflicting bodily injury, including the plucking of flesh and breaking of bones, until the victim died. Legend says the wheel itself broke when Catherine touched it, so she was (mercifully!) beheaded.
Early Christian tradition holds that angels carried her body to Mount Sinai, where, in the 6th century, the Eastern Emperor Justinian established St Catherine’s Monastery on the Sinai peninsula. The monastery survives to this day, with its famous collection of early Christian art and illuminated manuscripts.
The colourful ‘rose’ windows of Europe’s gothic cathedrals were called Catherine Windows until recent centuries, in reference to the saint’s martyrdom on the wheel.
All around the world, ‘Catherine’ remains a popular girl’s name, a lasting memorial to a truly heroic woman.
Till next week,
Jeff Fountain
p.s. It is still not too late to enroll The Evening School of European Studies whereever you are in the world. Visit www.tinyurl.com/eveningschool for information about how to follow this course online.

Towards a culture of hope