Yesterday Reformation Day came and went, but few outside of conservative church circles would have spared a thought for the influence of Martin Luther, John Calvin and other reformers on Europe’s cultural and spiritual development.

So let’s take a moment to reflect on the role of leadership in shaping our culture and society. The leadership of Luther and Calvin brought profound changes to a Europe in crisis, especially in the west. Such change didn’t just happen–it took vision, courage, faith, effort, thought, compassion, prayer, strategy and action.
Today in Europe we find ourselves again in crisis: financial, political and moral. What sort of leadership do we need?
The last fifty years has seen a huge erosion of the values and norms bequeathed to Europe by the Reformers. Secularisation and dechristianisation has led to a post-modernism holding that no one worldview could claim superiority over another; that all claims to truth were equally valid.
But now post-modernity’s daughter, multi-culturalism, has been declared a failure. And post-modernism itself is being exposed as bankrupt.
So where can we turn to now?
Populism, nationalism and patriotism are on the rise again in response to perceived threats to our western way of life. Self-appointed champions of the Judeo-Christian heritage, with no personal faith commitment to Judaism or Christianity, attract voters by creating scapegoats out of ethnic and religious groups. Such spokespersons seem to be offering new hope.
But is it biblical hope? 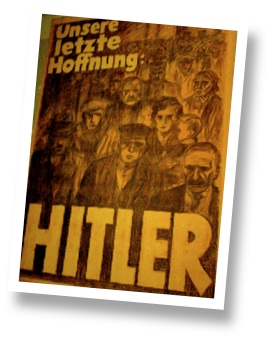 Last hope
I’m reminded of an ominous poster that hangs in the Dachau Concentration Camp museum, just outside Munich.  Printed in the early 1930’s, it presents to the German people their ‘letzte Hoffnung’, their ‘last hope’: a politician named Hitler.
Could in fact the potential rise of fascism become a greater cause for concern in the years to come than the growth of Islam in Europe?
At a recent Christian Social Congress in Holland, Dr Govert Buijs of the Vrije Universiteit in Amsterdam warned against those who channel public frustration against certain groups. Such leaders avoid seeing the need for change within their own circles, and open a never-ending spiral of accusations.
Community
What is needed then, he asked? Buijs implied we needed leadership committed to build community; and community was something to be created. He called Paul the great ‘engineer of community’. The apostle consciously strove to create community out of heterogeneous groups: male and female, Jew and gentile, rich and poor, slave and free–all different but one. These were not idealistic communities but concrete, local expressions. Every gift and talent counted.
Community meant making room for each other’s gifts; withholding judgement; bearing with one another; daring to need each other; to admit each other’s failings. It was never self-evident, Buijs explained, but was always worth fighting for.
Such ‘engineering of community’ emerged out of the Christian tradition to shape civil culture, for example in the city states, communes, where contracts and agreements were made and renewed annually. Voluntary associations for all sorts of purposes were formed: economic, educational, charitable, religious…

In their leadership of the Reformation, Luther and Calvin also stressed ‘bottom-up’ community, emphasising the priesthood of all believers.
How we need such leadership again today! But it won’t just happen–it will take vision, courage, faith, effort, thought, compassion, prayer, strategy and action…
Which is what HOPE•II, the congress we wrote about last week, is all about.
Till next week,
Jeff Fountain
p.s. Last week we started the Evening School of European Studies in Amsterdam, but it is not too late to enroll whereever you are in the world. Visit www.tinyurl.com/eveningschool for information about how to follow this course online.