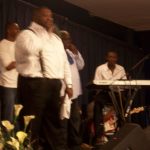 So there I was, nearly an hour after midnight, standing with my luggage waiting to be picked up outside the station in Biel, Switzerland. A few souls came and went but nobody seemed interested in rescuing me. In the sidewalk cafes nearby, the atmosphere was subdued, Switzerland having just been knocked out of the World Cup earlier that evening.
The reason for my visit to Biel was to address a conference of African leaders based in Europe, called GATE: Gifts from Africa to Europe. For some years now, a small group of migrant church leaders has been working towards building a network among leaders of African communities across Europe. The challenges such migrant groups face in becoming integrated and accepted include cultural misunderstandings and differences with Europeans.
One reason GATE exists is to help migrant leaders overcome such challenges, become integrated into the European church scene and engage in the evangelisation of Europe.
Fifteen minutes had already passed as I looked at my watch and glanced around the almost empty station square, looking for the dark face of someone who could be my contact. Ironically, Biel is home to the famous Swatch, in a country famous for clockwork precision.  What sort of cultural misunderstanding had led to my current predicament, I wondered. Somewhere in this city a hotel room had been reserved for me, but there had been no communication about where the conference was being held, when I was expected to speak, or about contact information with mobile telephone numbers.
Contact?
Earlier, on the train from Geneva, I had sms’d a Nigerian friend attending the conference asking if he perhaps had details about my participation in the programme. Suddenly, now at one a.m., an answer appeared on my iPhone. Saved!  I thought. I was in contact with a human! I was to speak at ten the next morning, I learned.
Quickly I sms’d back, telling of my predicament. And waited.  And waited. No response came. I tried calling. Again, nothing. (He had closed his phone immediately after his sms to me, he told me later.)
Keeping an eye out for a possible rescuer, I began googling on my mobile for hotels in Biel. One by one I was told there was no reservation for any Mr Fountain. Where could the conference guests be being housed?
After further waiting, I decided help would not be coming. I began walking into the town centre to find a hotel. Irritations were kept in check by the painful memory of a conference I once had organised myself. Through a misunderstanding, the speaker had been left at the airport, so he had checked himself into a hotel and booked a return flight home. Only after many hours had our conference personnel eventually tracked him down!
Finally, in the wee hours, I climbed into bed and dropped off to sleep thinking about the challenge of cross-cultural communications.
Next morning I texted my Nigerian friend’s number, telling him where I was. Very soon I was met by an African brother in the lobby of my hotel, apologising profusely for the misunderstanding.
Then came the explanation. A Swiss church member had been dispatched to pick me up. He had been there in good time, but he had not seen me. Neither had I noticed him.
We had both been looking for a black person!!
Celebration
GATE represents what I see as a sign of hope for Europe: the influx of Christian believers from Africa, Asia and Latin America into Europe. According to the Nova Research Centre, roughly half of all EU migrants are already church members–many more than Muslim migrants. This is a direct indicator of the growth of the church in those continents.
In Spain, the numbers of evangelicals has risen spectacularly due to the influx of Latinos. Migrant churches are transforming our urban congregations in London, Kiev, Stockholm, Rotterdam, Paris and other European cities, as we have reported in earlier weeky words.
Among the gifts the ‘G’ stands for in GATE are bold, colourful proclamation of the gospel, engagement in spiritual warfare, and vibrant and enthusiastic worship–as experienced at the conference.
Musicians from various corners of Europe formed a band led by a short but large pastor/singer/entertainer from an African congregation in London whose ample body was amazingly agile on stage. His fellow Africans responded with equal energy. They surely had the gift of celebration!
That was also true when, after the meeting was over, the overhead projector was switched to the television in time to witness Ghana’s defeat of the US in the World Cup.
Yes, they surely have the gift of celebration!
Till next week,
Jeff Fountain