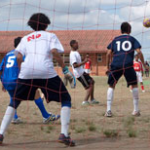 ‘It was an interesting mix of people in the Royal Tropical Institute in Amsterdam on a hot Sunday night. Colourfully dressed Africans and Brazilians, middle-aged white journalists, and a bunch of chirpy twenty-something-year-old intern girls, gathered around a large table with microphones.’

So began my son Antonie’s report on the hidden side of the event mesmerising sports fans the world over. Antonie heads up the Dutch branch of the anti-human trafficking agency, Stop the Traffik. His report continued:

A few men were playing a game of soccer just outside the entrance, and the sound of football mixed with the sound of African drums being played a little bit further away.
The atmosphere was laid back and friendly, with an undercurrent of expectation and hope. I had been invited by Dutch radio to be part of the pre-match programme of the Brazil vs Cote d'Ivoire game in the World Cup. Thankfully, instead of just talking about possible team line-ups, tactics and which country had the best squad (something I consider myself at best an amateur in), I was asked to give some background on West-African soccer players and human trafficking.
When people think of human trafficking, they usually think of forced prostitution or child labour on plantations and in mines. Few people know there is a lively trade in young football hopefuls, primarily out of West-Africa.
Thousands of kids throughout that region are enrolled in football-schools, with the hope of getting a contract at a European club. Parents will go to great lengths to pay for their children to go to these schools, including selling their house if they own one.
Some of these kids actually make it to superstardom, such as Chelsea striker Didier Drogba. But much more frequently, these kids don't make the cut. After having put their family heavily in debt – it's not unusual for a player's broker or school-owner to charge up to €5.000 to set up a trial with a minor European team, even if the kid is obviously not good enough – there is too much shame for them to go back and admit defeat. And so they end up roaming the streets of Europe as illegal immigrants. It's estimated there are thousands of these 'failed' soccer players in France alone.
But even so, these failed players are often the 'lucky' ones. Many other kids leave their parents to go to a football-school or a foreign club, only to discover they're going to no such place at all. Instead, they are forced to work in the mines and plantations of West-Africa. Life expectation for these child workers is incredibly short, working conditions abominable, and for forced labourers no possibility of escape or hope of a better life.
Closer to the actual World Cup setting itself, trafficking of a different kind is also taking place. I spoke to Justine Demmer of Oasis South Africa, who said that the amount of brothels and girls forced to work there as prostitutes has increased considerably in South Africa leading up to the World Cup. Another major increase of trafficking is that in street vending and begging, where children are forced to work for someone exploiting them.
Particularly at risk are the children of South Africa themselves. All the schools in the country have shut down for the duration of the championships, making the kids now extra vulnerable, as they are now roaming the streets in stead of safely in school. Oasis, our partner in South Africa, have joined with other organisations to set up a programme specifically for these kids, with hundreds of thousands of children now full-time off the streets as long as school is out.
Human trafficking is a horrible crime, and is far-spread and hard to fight. A first step in ending this modern-day slavery is raising awareness & having the stories told. That's the reason I was on radio, and that's why I'm happy to be able to contribute to this Weekly Word.
There is a long battle ahead, but in the last few years we are seeing people's eyes being opened, an incredibly important first step in our fight to Stop The Traffik. – Antonie Fountain

Did you know half of this? I didn’t.
Till next week, when Romkje and I will travelling on this summer’s Heritage Tour,
Jeff Fountain

0 responses to “The World Cup’s dark side”