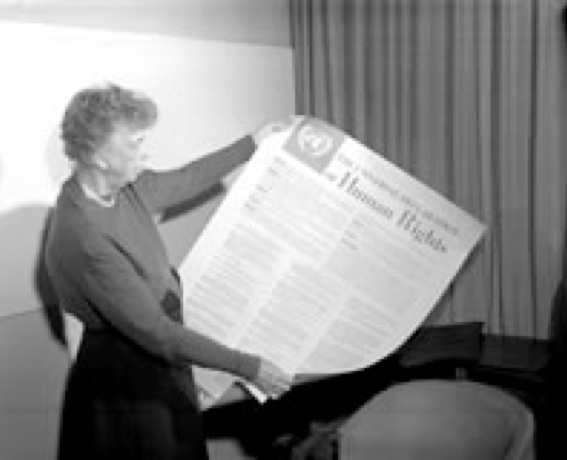 Human rights is a subject conservative Christians have often suspected as being a humanist plot distracting us from our responsibilities and duties to one another. The irony is that, outside of the Biblical framework, it is very difficult to say where they come from.
Yet both Catholics and Evangelicals viewed the cause of human rights negatively until the second half of last century, often because of their association with the French Revolution, its ‘Declaration of the Rights of Man’, and its openly hostile attitude to God, the Church and Christianity.
Human rights was actually anathematised under Pius IX in the mid-nineteenth century, until leading Catholic thinkers helped to change official thinking a century later. At Vatican II, human rights became a recurring theme.
Christian voices have often argued that the assertion of one person’s right against another promotes selfishness. They stress duties and responsibilities as well as rights. Susceptible to a culture of conspiracy, some Christians suspect human rights to be a secular humanistic plot to enforce non-biblical values on a global scale. The UN Convention on the Rights of the Child (CRC), for example, is suspected by some as being anti-family and over-empowering of children, despite its affirmation of the rights of parents. For this reason, the US remains the only country (unless you also count Somalia but who could sign for that country?) not to have endorsed the convention.
Atrocities
On the surface it may well seem that the concept of human rights emerged from liberal and humanistic wellsprings: from Renaissance humanism, and later developed by philosophers like Locke and Kant with their vision of free, autonomous, self-determining individuals and a state whose task was the protection of citizens’ rights.
Christian thinking about the idea of human rights only took on explicit form much more recently. The atrocities of World War II pushed human rights to the top of the global agenda. The preamble to the charter of the United Nations (1945) affirmed ‘faith in fundamental human rights, in the dignity and worth of the human person, the equal rights of men and women and of nations large and small…’.(see photo).
The following year, the UN established its Human Rights Commission (after strong lobbying by Christian pressure groups) chaired by Eleanor Roosevelt, whose prayer each night was: ’Save us from ourselves and show us a vision of a world made new’. The commission drafted the Universal Declaration of Human Rights (UDHR) after consulting a global group of intellectually gifted individuals, including Ghandi and Aldous Huxley (author of Brave New World). The first article of the UDHR declares that ‘all human beings are born free and equal in dignity and rights’. Here was the first occasion that the idea of dignity was proclaimed in a document of international law.
Charles Malik, Roosevelt’s successor as commission chairman, also a Christian, raised the question of the origins of human rights when presenting the draft declaration to the UN General Assembly in 1948: ‘Where do they come from? Are they conferred upon me by some external visible power such as the state or the United Nations, so that what is now granted me may some day be conceivably withdrawn from me? Or do they belong to my essence so that if they are violated in any way I cease to be a human being at all? If they did belong to my essence, should they not also be grounded in a Supreme Being who, by being the Lord of history, could guarantee their meaning and stability?’
Worthy
Last week my family and I attended a symposium at the University of Amsterdam on the occasion of the retirement of a close relative who lectured in the law faculty. The topic of the event was Child Rights and Dignity.
While speaker after speaker affirmed that the rights of the child, and of any human being, were rooted in human dignity, it was candidly admitted that the concept was easier to define than to explain its nature. Dignity, to use a dictionary definition, is ‘the state or quality of being worthy of honour or respect’. But if humans are merely the product of a chance process of ‘slime-plus-time’, why should they be worthy of honour or respect, and possess ‘rights’ any more than a dog or a tree? How does equality follow from a long materialistic process which guarantees the survival of the fittest?
Indeed, grounds for human dignity can only be found in the opening chapters of the Bible, which declare that all humans are made in God’s image. William Temple once said: ‘My worth is what I am worth to God; and that is a marvellous great deal, for Christ died for me.’
John Stott wrote that the Bible goes far beyond the secular understanding of human rights. It emphasises the believer’s responsibility to secure the other person’s rights, even foregoing our own rights.