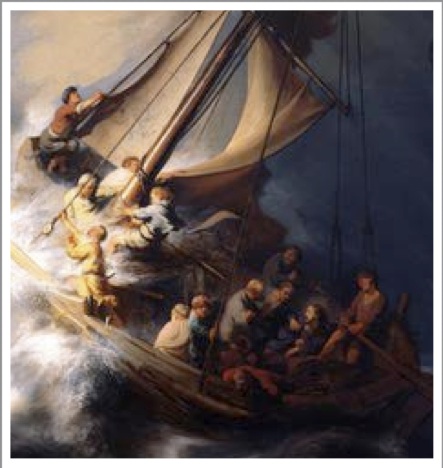 Many were glad to say goodbye to 2014. There were days we didn’t want to see the headlines with more tragic reports about the Ukraine, Crimea, Gaza strip, Ebola, Syria, MH17 downed over the separatist territory, the bizarre fate of MH370 eventually located off the Perth coast; and lastly, three days after Christmas, the disappearance of Asia Airline flight QZ8501 with over forty members of an Evangelical mega-church in Surabaya.

And now the new year begins with a tragedy closer to home for YWAMers: the HAWAI’I ALOHA, a 25-metre sailboat operated by YWAM Ships Kona for humanitarian missions, capsized offshore from the Kona coast of the Big Island of Hawaii during a storm on Saturday. One of the vessel’s crew remains missing. The other four were rescued in their emergency life-raft.
We’re tempted to ask ourselves, what more tragedies await us in 2015? Like the disciples caught in a storm on Lake Galilee, we want to cry out to Jesus, ‘Don’t you care if we drown?’ (Mark 4:38).
Frankly, nobody can promise us that 2015 will be better than the one just past. We can wish each other the very best for the new year, and mean that sincerely. Fact is, we still live in a fallen world. Accidents and tragedies will continue to happen this year. From my office this morning I could see the motorway traffic crawling to a standstill and hear ambulance sirens because of a bad accident nearby.
Already this year’s headlines are warning us that the European crisis could return with a vengeance. The Greeks have to go back to the polls in three weeks, and may choose the far-left populist anti-austerity party feared in Brussels. Elections in Britain, Spain, Finland and Portugal are expected to yield gains to anti-European parties. Even Herman van Rompuy, as he stepped down from his role of president of the European Council a few weeks ago, lamented that unemployment and lack of economic growth was endangering the whole European idea.
Paradox
Biblical realism offers us as believers a framework to make sense of this fallen world. Humanists only see the good in humans. Nihilists can only see the senselessness of eveything. But those who take the Bible seriously, if not always literally, resolve the strange human paradox of dignity and depravity, glory and shame, by recognising that our current condition is not how God intended us to be; the world is not how God designed it to be. Something tragic happened at the start. We have all fallen short of God’s glory. We have all sinned.
All, however, is not lost. That’s what Christmas really was about. God took the initiative to do something about the wretched human situation. He became one of us. He shared our predicament. He climbed in the boat with us.
One of the images remaining with my wife and I from 2014 was Rembrandt’s painting of Jesus calming the storm. A bible study based on this painting pointed out to us that the half of the crew in the forward part of the boat seemed frantically to be trying to save themselves; the other half were praying, throwing up overboard or pleading with Jesus to do something. When you count the heads, you realise there are actually fourteen people on board: Jesus, the twelve disciples and one more. The figure in blue-green, holding onto the rigging and looking, as it were, into the camera is the artist himself.
Martyrs
Rembrandt was no stranger to storms in his life. Neither did he live a model  Christian life. But he did reveal some powerful theological insights in numerous paintings. In this particular instance, Jesus spoke the words ‘Quiet! Be still!’ The wind obeyed and it was completely calm. Then he said to his disciples, ‘Why are you so afraid? Do you still have no faith?’
Most of these same disciples in the boat (excluding Judas–and Rembrandt of course) went on to become martyrs. Jesus never promised them personal peace and prosperity. He did however promise to give them and us peace in the midst of storms, a peace the world doesn’t understand.
His resurrection promises us that in the long run the books will be balanced; that truth, love and justice will triumph; that there is always hope. His earthly ministry birthed a movement to bring transformation here and now, the kingdom advancing even in a fallen world, a prophetic sign of what is over the horizon.
Let’s fix our vision on that horizon of hope in 2015.
Till next week,
Jeff Fountain