Today is Europe’s birthday! And she’s only 61 years young. At least, that’s according to the decision of EU leaders meeting in Milan in 1985, when they decided to recognise this day as the birth of the movement that has led to the current EU.
However, this birthday remains one of Europe’s best kept secrets. Few Europeans are aware that on 9 May 1950 the first move was made towards the creation of what is now known as the European Union.
This past week across Europe celebrations were held in many countries commemorating the end of World War Two. We’re all familiar with the photos of the Allied soldiers liberating towns and villages, giving out chocolate and kissing the girls. But once the chocolate and kisses had been given out, did everybody simply go home and live happily ever after?
While we know who won the war, do we know who won the peace? The five years after the war were tumultuous years. An Iron Curtain came down across Europe; the Berlin Airlift had to be mobilised to save a beseiged city. Trade unions in France, Italy and the Ruhr Valley, masterminded from the Kremlin, did their utmost to bring governments down and to create chaos generally. 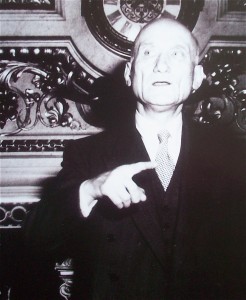 Against this background, the French Foreign Minister Robert Schuman surprised the world on the evening of 9 May by announcing a plan for France, Germany and other European countries to pool together their coal and steel production as "the first concrete foundation of a European federation".
Calling upon those countries that had almost destroyed each other, he proposed the creation of a supranational European Institution to manage the coal and steel industry, the basis of any military power.
Soul & conscience
That day was the turning point in post-war European history. Hence the decision to celebrate 9 May each year as "Europe Day".
Europe of course has existed for centuries, even millennia.  But over those centuries, many terrible tragedies have happened. What began to happen on 9 May 1950 was a process to break the old cycle of vengeance and violence, and a movement to build a community of nations.
Schuman’s personal vision was for ‘a community of peoples deeply rooted in Christian values’. But this community, he warned, ‘cannot and must not remain an economic and technical enterprise; it needs a soul, the conscience of its historical affinities and of its responsibilities in the present and in the future, and a political will at the service of the same human ideal’.
The European Movement would only be successful, he argued, if future generations ‘managed to tear themselves away from the temptation of materialism which corrupted society by cutting it off from its spiritual roots’.
So if Schuman were here today, would he be celebrating Europe’s ‘birthday’? On the one hand he would be delighted by the unbroken six decades of peace among the  EU members. But surely he would be appalled by the false ethic of greed in the financial sector, and the ‘culture of death’ expressed in youth suicides, pre-natal infanticides (abortions), assisted suicides (euthanasia), low birth rates, rising murder rates, signs of deep spiritual poverty.
State of Europe
The predominance of materialistic values in Europe today and the quest for immediate gratification, sensuous pleasure and trivial pursuits would would make him greatly concerned for Europe’s future.
Today is also marks the birth of the State of Europe Forum, initiated by the Schuman Centre for European Studies. With folk from 40 nations across Europe converging on Budapest for the HOPE•II Congress beginning on this Europe day,  we are gathering in a pre-congress event as the first of an annual event to recall Schuman’s founding vision and values, and to evaluate Europe’s current state. Vishal Mangalwadi, Sander Luitwieler, Os Guinness and Michael Schluter will help us reflect on how to reactivate these values to safeguard Europe’s future.
Immediately following the forum is the opening session of the HOPE•II Congress, the event we have been preparing for over much of the past year. Our prayer is that in some small way, this event may help to stir the Body of Christ to act as salt and light in many spheres of society; salt to prevent decay and light to bring understanding and wisdom to the many baffling issues facing us in Europe today.
May we be recognised as people offering hope to a continent in need of fresh vision and renewed commitment to the command that motivated Schuman: to love one’s neighbour as oneself.
Till next week,
Jeff Fountain