The past few weeks in our office have been very intense with final preparations for the HOPE•II congress starting next Monday. Weekly Word has been hedged out by printer’s and other deadlines.
However, those registered for the congress have for the past three weeks been receiving a Daily Hope meditation, written by Dr Thomas Schirrmacher for Hope for Europe.
These have been refreshing and thought-provoking morning and evening readings. Updated daily, they can be read on the congress website.

Here is a sampling over recent days:
• God Himself has always been the Giver of Hope – from the very beginning of history
World hope begins with the fact that God is the first missionary.
God has always been the first missionary. Immediately after the Fall, man’s history seemed to have ended before it had really begun, but God did not give up. In grace, He visited the Garden of Eden (Gen. 3:8-9), seeking for Adam and Eve, and calling, “Where are you?” (Gen. 3:9). In proclaiming both future judgment and future redemption (Gen. 3:14-21), He Himself gave new hope to Creation.
• Suffering for Hope’s Sake
It is not only important to endeavour to hope in suffering, but it is often necessary also to suffer for the sake of our hope. History shows that nothing can be achieved without the willingness to suffer for hope.
Paul insists to his judges that he is on trial “because of my hope in the resurrection of the dead” (Acts 23:6; see also Acts 26:6-7; 28,20; also texts on the resurrection on Day 19).
Instead of comfortably proclaiming our hope from the living room sofa, we need to accept the necessity of disadvantages and of concrete suffering for our hope—not because suffering has any value in itself, but because our world causes us to suffer and because our pain highlights the seriousness of the situation.
• Hope Creates Endurance
Hope helps us to endure, when we would prefer to give up.
“But those who hope in the LORD will renew their strength. They will soar on wings like eagles; they will run and not grow weary, they will walk and not be faint” (Isa. 40:31).
This is true for our personal lives, as well as for the Church and for society.
If we expect the fulfilment of our hopes in the ‘distant future’, we will be able to wait. The world will notice this attitude here and now.
Many European Christians complain that certain areas of social life once dominated by Christian values are now often dominated by other values. In complaining we ignore the fact that Christian influence has always depended on the long-term endeavours of believers who often never experienced the realisation of their dreams. When we work on legal reform, build colleges, or work with young people without a job, we influence the distant future, and we may not see harvest for many years. We need long-term Christian projects and initiatives in all aspects of creation and church life.

One of the several printer’s deadlines was for the congress reader composed of articles from plenary speakers, which each participant will receive. We’ve given it the title, The Bridge of Hope, with a photo of the magnificent Chain Bridge spanning the Danube River linking the two former cities of Buda and Pest into one. 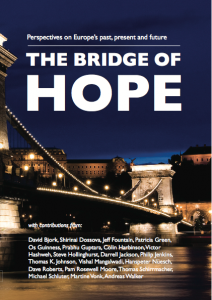 For hope truly is our bridge to the future. Just as the Chain Bridge is suspended by two solid stone towers, lit up at night as one of Budapest’s most spectacular landmarks, so too biblical hope rests on two unshakeable pillars: God’s person and God’s purposes. The writer to the Hebrews tells us that these two unchangeable things offer us the anchor of hope that is sure and steadfast (Hebs 6: 18,19).
At HOPE•II we will begin recalling God’s acts in the past, and the way in which his message has brought transformation again and again in Europe’s past. Sometimes the term ‘post-Christian’ is read fatalistically, as if Europe is doomed to remain that way. The good news it this: we’ve been here before folks! I’m fond of quoting G.K. Chesterton, who about 100 years ago quipped that over the previous 1900 years, on at least five occasions, it had seemed as if the church was ‘going to the dogs’. But each time, he said, it was the dog that had died!
Nurturing a climate of hope is one of the goals of the congress, and for that we need to focus on God’s purposes and promises. What can we expect God still to do on our planet, in our continent? How can God’s people, often as a small minority, yet make a difference?
Two of the speakers know from experience the power of creative minorities. Shirinai Dossova, converted from a muslim background, was among the crowd around the Russian parliament in 1991 when the communists attempted to overthrow Gorbachev. Shirinai personally confronted soldiers in their tanks giving them Bibles and telling them that that Book said it was wrong to kill.  The soldiers never went into action. Bernd Wittchow was elected mayor of his East German town after the Wall came down despite his wheelchair and because of his Christian character.
With this kind of inspiration, we can confidently cross the bridge of hope from the past into God’s future.
Till next week,
Jeff Fountain