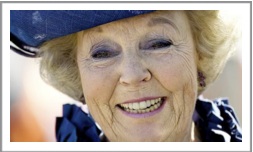 Let me confess that I am not a great royalist–despite the fact that I have often joked about the three queens in my life. As a New Zealander, there’s Elizabeth. As  a Dutchman, there’s Beatrix. As a husband, there’s Romkje, sometimes nicknamed ‘the Queen’ by family and friends.

Royalism is not in my genes. One of my forefathers, John Fountain, a co-worker with William Carey in India, got his fingers rapped by the Baptist Missionary Society for expressing republican sentiments in correspondence back home in England, which was at war with Napoleon’s republican France.
The pomp and ceremony, the wealth and ostentatiousness,  and the fawning of the press around royalty–who, after all, are mortal human beings who have to dress and undress like all the rest of us–rather grate against my colonial sense of egalitarianism.
The privileged position of state churches often closely tied to monarchies through the centuries also clashes with my non-conformist Baptist background.
Nevertheless, as this is Queen’s Day (Koninginnedag) in Holland, it’s time to give honour where honour is due. I have put out the Dutch flag by the front door (as most Dutch do on this day) without my wife even asking me to do so! And we have sat before the television drinking coffee and eating orange cake (in honour of the House of Orange) watching the queen and members of her family parade through a town mingling with the public–even leaving her signature on the (orange) plastercast of a lad with a broken leg.
Many in the crowd are sporting white flowers in support of the queen whose son Friso is conspicuously absent from the entourage. He still lies in a coma after being buried by an avalanche in a ski accident in Austria earlier this year, and is not expected ever to regain consciousness.
Reminder
In these post-Christian times, when mention of Christianity in political and diplomatic circles is often considered embarrassing, it is refreshing that several European monarchs continue to be forthright in referring to God and to their faith in Jesus Christ.
Beatrix in recent Christmas messages has frequently reminded her audiences of the Christian values on which Holland and Europe have been built, while remaining sensitive to those new Europeans–as well as the old–who do not share her professed faith.
The Protestant faith of Beatrix’s forefather, William of Orange, who led the successful rebellion against the Catholic Spanish overlords, provided the moral impetus for the birth of the Dutch nation, as well as the foundations for  its government and democracy. The House of Orange, for all its imperfections, is a reminder of these roots.
Allegiance
Across the channel, murder and adultery on behalf of Henry VIII were not a great start for the Church of England! Yet that church has been and continues to be a source of fresh spiritual life, such as the recent Alpha movement.
Last week, on Elizabeth’s visit to Wales celebrating her diamond jubilee, the Archbishop of Wales, Dr Barry Morgan, praised the queen for 'doing God' in public in spite of changing public opinion.
Christian Today magazine reported Dr Morgan as honouring the queen for having regarded the Christian faith as the rock on which she had been able to draw strength and comfort over the last 60 years, ‘amidst all the shifting sands of public opinion and different viewpoints’. Her faith had been a reminder that Britain had been shaped by the Christian faith.  The archbishop added that there had been a tendency in British society ‘to believe that we, as a country, “don’t do God in public life”’.
“You have never been ashamed to confess your personal allegiance to Jesus Christ, whatever the prevailing political climate,” he told the queen.
Yesterday as I was driven to the airport in Copenhagen, we passed the royal palace of Queen Margrethe II. Here was yet another European monarch who reminded her people of their Christian roots. Heiress of a long pietistic tradition in the Danish royal family, which actively supported early protestant missions from Halle, Herrnhut and in Carey’s Serampore, she chose for her motto: God's help, the love of The People, Denmark's strength. Each year she leads her government in a prayer for God’s help for Denmark. An accomplished artist, her illustrations were used for the Danish edition of Lord of the Rings, a story with clear Christian values which she also helped to translate.
Long live such reminders!
Till next week,
Jeff Fountain