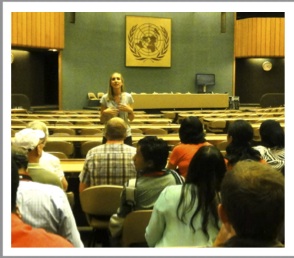 Christians have often suspected human rights to be the product of humanistic Enlightenment thinkers devising ways to sideline the Church and religion in the public square. With abortion, euthanasia and even infanticide being claimed as human rights today, many Christians remain apprehensive about the very concept.
Yet that is not the full story, as participants in the Masterclass for European Studies learnt this past week in Switzerland.
After three days in a country village near Bern, we spent the rest of the week in the international city of Geneva. A global capital of human rights organisations, Calvin’s City of Refuge is now home to the European office of the United Nations, the UN High Commission for Refugees, the International Red Cross and over 120 NGOs, most engaged in safeguarding human rights.
Visits to the UN, the Red Cross and the World Council of Churches fleshed out the talks by Dr Evert van de Poll and myself offering Christian perspectives on human rights.
In Evert’s words, human rights appeared to be the domain of secular activists and left-wing politicians, many of whom would find it bizarre to relate this theme to the Word of God.
For Christians also, it has seemed as if Churches and human rights often belonged to different worlds.
The Declaration on the Rights of Man and Citizen drafted during the French Revolution (1789) and later similar texts couched human rights in secular language applying them to society at large. This secular presentation made some Churches apprehensive of the idea of human rights.
The Roman Catholic Church in particular considered the emphasis on ‘human rights’ part of a secularist agenda.  Churches and Christian action groups find themselves on opposing secular, so-called human rights groups campaigning for causes at odds to Christian convictions: the appeal to ‘non discrimination’ to promote same-sex marriage, or to ‘individual self determination’ concerning the ‘right’ to demand euthanasia.
About-turn?
Yet since Vatican II, the Roman Catholic Church has defended and promoted the cause of human rights. In fact, nowadays almost all Church denominations endorse the principles of human rights: for example, in the area of democratic civil rights, religious freedom, for the abolition of modern forms of slavery, against the trade of women in the sex industry and against discrimination of migrants. So has something changed? How do we explain this ‘about-turn’?
Human rights are considered to be universal because they are derived from the notion of natural law, i.e. the moral law written in the hearts and minds of humans. The idea that the Enlightenment took this notion from Greek and Roman philosophers is an incomplete picture of how human rights came about.
As Evert explained, the seed of the Gospel had to take root in Europe before the notion of natural law and the idea of the fundamental unity of mankind could develop. Paul related the idea of natural law to the Law of Moses: ‘Gentiles do by nature what the Law requires’ (Romans 1). Monotheism founded the idea of humanity as a united whole, inhabited by responsible and unique individuals, all created in the image of God. That implied all were equally entitled to the same rights and freedoms. For the American founding fathers, this was ‘self-evident truth’–but not for those outside the sphere of biblical influence.
Evert quoted Jean-Louis Bruguès who rightly observes, ‘the Biblical heritage has become the blind spot of the secularised societies… Man is created in the image of God. With this basic law, which is based on the Judeo-Christian revelation, everything in ethics is said, or at least the most essential is said.’
Decisive
The atrocities of World War Two galvanised world opinion behind both the Universal Declaration of Human Rights and the European Convention on Human Rights, thus shaping the modern context of human rights. While researching the background of these documents, I discovered the very decisive role devout Christians like Jacques Maritain, Charles Malik, Robert Schuman and leading figures in the World Council of Churches had played in putting human rights on the agenda on both sides of the Atlantic.
As we returned home to Holland, we drove parallel to the mountains in Alsace where, exactly one hundred years ago this weekend, French and German soldiers first engaged in the hostilities that launched the Great War, and effectively started a European civil war that lasted most of last century in various phases.
I found myself feeling very grateful for the outworking of God’s ‘common grace’ in our world through such imperfect institutions as the UN and the Red Cross in their efforts to safeguard human rights.
Till next week,
Jeff Fountain