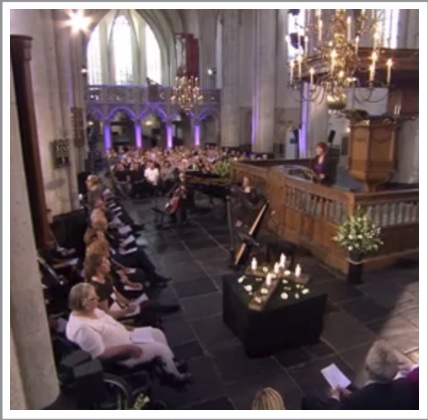 The world watched on as Holland mourned this past week. Four days in a row, the same somber ceremony was performed at Eindhoven Airport, as coffin after coffin was respectfully unloaded from the Hercules aircraft into scores of waiting hearses.
The unprecedented kilometre-long convoy speeding down the motorway toward Hilversum was followed by thousands on bridges and other vantage points along the route, along with hundreds of millions around the globe via CNN, the BBC and other networks. Oxford historian Timothy Garton Ash commented on television about the contrast to the upsetting images of the rough handling of bodies and possessions in those forlorn fields of eastern Ukraine just days earlier.
As part of the national day of mourning, with flags flying half-mast across the country, and windmills set in the ‘mourning position’, an ecumenical memorial service was held in the Joriskerk in the heart of Amersfoort. The overflow congregation spilled out into the church square where crowds followed the ceremony on large screens. Led by both Catholic and Protestant clergy, the service was also carried globally on global television, interspersed with scenes of the travelling motorcade.
Vicarious
Most don’t associate scenes of packed churches with secularised Netherlands, known for its tolerance of drugs, abortion and euthanasia. Yet such a Christian service seemed to all to be the appropriate thing to hold.
While many see Europe as post-Christian, last Wednesday was a clear example of how, despite the dominance of secular humanism in the public square, many unchurched people maintain an indirect, often unconscious link with Christianity.
This is a point Evert van de Poll is stressing this week in our Masterclass on European Studies in Switzerland. While it is well-known that the number of practising European Christians has been in constant decline in recent decades, there is a sense in which Europe remains more ‘Christian’ than one might conclude at first glance.
Two phenomena confirm this, argues Evert. One is called vicarious religion, a term coined by sociologists referring to when a minority practice a religion and serve the non-religious majority who appreciate their practice. These sociologists noticed that the Church embodied the collective religious memory of the whole people, including those who do not practice the Christian faith. In this respect, the church had a function for the whole society. People appreciate that there are churches, and find them useful. The Church is part of the national cultural heritage, so the Church should go on, even when they do not participate themselves.
Grace Davies, in her book ‘Europe: the exceptional case’ has this to say: Significant numbers of Europeans are content to let both churches and churchgoers enact a memory on their behalf (the essential meaning of vicarious), more than half aware that they might need to draw on the capital at crucial times in their individual or collective lives. The almost universal take up of religious ceremonies at the time of a death is the most obvious expression of this tendency; so, too, the prominence of the historic churches in particular at times of national crisis or, more positively, of national celebrations.
This, says Evert, is a typical European phenomenon, difficult for non-Europeans to understand.
Default
Closely related to this concept is the idea of Christianity as the default religion of Europeans, as in computer terminology. You’re not religious yourself, but want something religious, so you fall back on Christianity. Secularized people wishing to have a religious funeral for their deceased loved ones are unlikely to approach a rabbi or an imam.
Where do Europeans turn to when they are thinking about spiritual matters, asks Evert, about God, prayer, afterlife, sin, the origin of man?
One option is an esoteric New Age kind of spirituality. In computer terms, this is not a default setting, but a customization, based on personal configurations.
The default option is taking up Christian traditions that linger in the collective subconscious of European people. This option doesn’t take much effort. It is pre-packaged. It offers a Christian image of God, a Christian image of man, a Christian idea of prayer, and so on.
Christianity, Evert concludes, is still seen as a normal part of the cultural landscape of Europe.