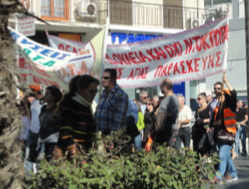 Imagine if nearly two out of three of the young people you knew had virtually no prospect of ever getting a job. Imagine if the students you knew–your friends or relatives–couldn’t get any qualifications because the university was closed for the foreseeable future due to staff strikes.

Imagine if you began hearing more and more stories of suicides among both adults and youth you knew because of hopelessness and despair.
Imagine if the gnawing signs of poverty began creeping into your neighbourhood, with the number of household income levels below the poverty line rising from 5% to 45% in just four years!
Imagine that in your neighbourhood, many people just didn’t have enough to eat, and that malnutrition was becoming widespread.
Imagine that your government cut public health spending by a whole quarter, and downgraded some hospitals to ‘healthcare centres’ to reduce government spending, thus limiting capacity to treat adults or children.
Imagine that stocks of prescription drugs were dangerously low because pharmaceutical companies hadn’t been paid.
Imagine if the price of your house had fallen by a third since 2009; and that a quarter of all your friends’ mortgages were delinquent, making their homes under threat of repossession by the banks.
Imagine if many of your professional friends were choosing to leave the country, further weakening the core competencies in the economy and in society.
All this is easy to imagine – for Greeks.
For they experience it daily.
Fortress
Imagine also if there were tens of thousands of migrants trying to get into your country, as bad as conditions are there. (Remember: a refugee would love to have your problems!) The lucky ones might end up on the streets of Athens, lining up at soup kitchens. The unlucky ones are stuck on the other side of a recently-built 10-kilometre wall on the Greek-Turkish, feted as a ‘triumph of EU immigration policy’.
A 30-kilometre wall is presently under construction on the Bulgarian-Turkish border to keep out Syrian Christians, for example, who have been traumatised firstly by the events in their homeland where they have lost homes, jobs and loved ones, secondly by the hazardous overland journey through Turkey to this border, and now thirdly by the unwelcoming concrete wall of Fortress Europe.
So what? Is this really our problem?
That depends on how we understand the gospel. And who we think ‘our neighbour’ is.
Do we have any good news to tell? Does the gospel have any relevance for these sort of daily issues? Or is it really only about pie-in-the-sky-when-we-die-by-and-by?
But don’t we pay our politicians to sort out these issues?
Yes, partly. But these issues are far too important to leave to the politicians. Many of them can only think as far as the next election. Their motivation is not usually idealistic. It is to get re-elected, to stay in power.
Essence
Democracy can only work when we realise that it is us, the people, who empower and commission the politicians, and remind them of their priorities.
Here’s also where the concept of solidarity comes in. That’s not a word evangelicals and protestants are used to; it sounds more like trade union language. Actually, it’s a very biblical word, and a word Catholics have long used to express our human responsibility and commitment  towards each other. It’s essence is love. As is the essence of the gospel. As is the nature of God.
Solidarity, democracy, migration, economics–and threats to religious liberty in Europe today–are issues we are taking seriously in Athens next week at the State of Europe Forum, close to the parliament buildings at the heart of the Greek crisis.
For somewhere, someplace, believers from across Europe need to come together to seek God for answers to issues facing us in Europe today. This forum is designed to be such a place.
But what can we lay nobodies contribute?
Strangely, this is how God loves to work: through the weak to confound the strong; through the foolish to confound the wise; through faithful minorities to effect his plans.
Last week in Brussels I met with several leading Christian economists in preparation for Athens. We identified areas politicians don’t usually look at, such as the voluntary sector where churches all across Europe can and do make a huge difference.
We expect to be over 80 folk from all across Europe. Perhaps even you could still join us. Imagine.
Till next week,
Jeff Fountain