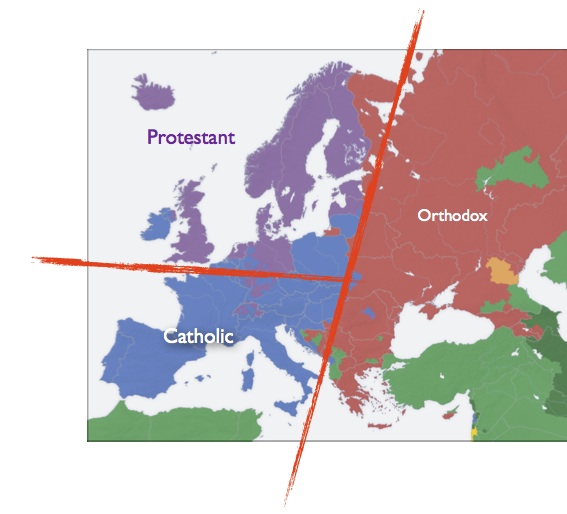 Much of the story of Europe can be told in terms of one book and two splits. The book is the Bible, which has influenced European life and culture far more profoundly than any other book or cultural source.

The two splits happened in the eleventh and sixteenth centuries respectively. In western Europe, we are much more familiar with the latter split. Over the coming years we’ll be hearing much more about it as we approach the 500th anniversary of the year in which Martin Luther triggered the Protestant Reformation with his 95 theses opposing the sale of indulgences: 1517.
A movement is already under way under the name Refo500 with an excellent website in several languages linking initiatives planned for 2017 to reflect on the legacy of the Reformation for today. Refo500 partners include Protestant and Catholic organizations, churches, universities, museums, cities, publishers and so on.
More accurately we should talk of Reformations, plural, as the Catholic Reformation and the Radical Reformation were parallel movements that will also be reflected on in Refo500 activities.
By no means was the split simply positive. We often talk of 1517 as if the Reformation happened within twelve months. In fact, that year triggered a 130-year period of religious and bloody upheaval that lasted until the Peace of Westphalia of 1648. In some ways, the Protestant Reformation began the process of secularisation that has continued until today.
Faultline
The eleventh-century split is less familiar to us westerners, and yet continues to be a deep source of political, economic, social and spiritual tension on our continent. Many events over the last century can be traced back to this spiritual faultline nearly one thousand years old.
World War One was triggered in Sarajevo right on this east-west divide. Philip Jenkins has just published a book called The Great and Holy War to show how religion motivated circumstances on all sides of this war.
The Balkan wars of the ’90’s and even the current crisis in the Ukraine cannot be understood without reference to this deep division. It is in the forefront of Putin’s thinking as he promotes himself as the moral leader of the non-western world, including the BRICS nations, in opposition to a ‘decadent’ Protestant-Catholic western world. He keenly resents the role the Catholic Church played in the downfall of communism, for example.
And to think that this split was occasioned by an argument about the Trinity; …about the nature of Jesus and whether or not the Holy Spirit came from the Father or from the Father and the Son!
Despite the fact that Christians around the world–Orthodox, Catholic and Protestant–all recite the Apostles’ Creed and affirm the basic doctrines of the Christian faith, this rift among Christians known as the Great Schism still affects today’s headlines!
The UN, NATO and EU have no answers for this. Only Christians themselves can put this right.
Pluralism
You may remember back in 1986 the so-called ‘Athens Three’ trial, when two YWAMers and a local Greek Christian leader were sentenced to three-and-a-half years prison for proselytism. Their crime was that a 16-year old Greek youth had been given a Gospel of John by a crew member of the Anastasis, YWAM’s Mercy Ship being outfitted in Greece. The charge was dismissed eventually but only after much pressure from the EU.
Right now a draft bill promoting religious pluralism is before the Greek Parliament, which could introduce an historic change. Yet what is more important than a legal change is a heart change on the part of Christian leaders.
For Europe right now desperately needs moral leadership. Church leadership should have been able to call for solidarity across the continent in this season of fragmentation and social tension. But we have been unable to do so. We have not fleshed out this solidarity. We have not modeled the 'unity with diversity' which is the motto of the EU. Sadly we are failing Europe in her hour of need.
As we meet this week in Athens at the State of Europe Forum, around Europe Day, May 9, we come together as Orthodox, Catholic, Protestant and Pentecostal believers, wanting to listen to and learn from each other. Our prayer is that in some small but perhaps significant way, we can be part of the answer rather than of the problem.
To passers-by, we may appear to be simply ‘babblers’, as the philosophers saw Paul on his visit to Athens. But that babbler planted the seed that started a global revolution.
Till next week,
Jeff Fountain