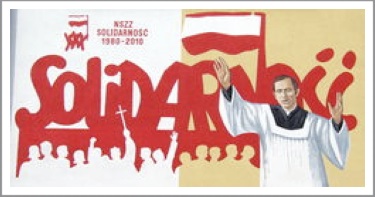 The loss of solidarity signalled by last week’s European election outcomes has prompted much concern and uncertainty concerning Europe’s future.

Roy Searle of the Northumbria Community wrote in his blog that he woke up feeling depressed, downcast,  demoralized and quite ashamed to be British: ‘To be a citizen of a country that gives the majority vote to UKIP and returns more UKIP MEP’s than any other party, makes me hang my head in shame.’ Annoyed with the ‘inept, out of touch, arrogant and complacent attitude’ of the mainline parties which had paved the way for opportunism, he suggested that ‘Jesus would look over election results and weep, or moved with compassion demonstrate his righteous anger.’
Roberto Savio, founder of the Inter Press Service (IPS) news agency, laments the disappearance of the sense of solidarity and common destiny which accompanied the birth and growth of the European project. Disenchant-ment with Europe as an ideal has grown to a dangerous point, he regretfully concludes.
The word ‘solidarity’ may prompt those old enough to remember to think of the Polish trade union, Solidarność, which catalysed the collapse of communism 25 years ago. The choice of the union’s name was not a coincidence. Lech Wałęsa, its leader, was a devout believer inspired by Catholic social thinking.
Antithesis
For ‘solidarity’, as his compatriot Monsignor Piotr Mazurkiewicz from Warsaw University told us at the State of Europe Forum in Athens last month, went beyond healthy patriotic caring for our own communities of family and fatherland to include the other, as the Good Samaritan parable reminded us.
Our neighbour was not only a human being with his or her own rights and a fundamental equality with everyone else, he reminded us, but the living image of God the Father. Our neighbour must therefore be loved, even if an enemy, with the same love with which the Lord loves him or her. The ‘Solidarity’ revolution, rejecting the Marxist class struggle, was only possible thanks to the specifically Christian dimensions of grace, forgiveness and reconciliation, he explained.
Nationalism however, he said, was a pathological overemphasis on the nation, the antithesis of true patriotism. It characteristically recognised only the good of its own people and sought only its own fulfilment, neglecting the rights of others. Patriotism, as love of one’s own country, recognised the same rights of every nation. Patriotism and nationalism were as different as self-love and selfishness.
The monsignor’s insightful paper, Solidarity, Patriotism and Nationalism, can be read in the 120-page State of Europe Forum Report now available, along with all the other talks, studies and papers presented. A one-page summary, The Athens Affirmation, offers a concise overview of the main themes and outcomes of the event. These are documents which can help us find biblical responses to prevailing attitudes in Europe.
Identity
Solidarity has to do with belonging and identity. Who do we belong to? Who are we? Our answers to these questions depend on what stories we were told as we grew up. By our parents, siblings, teachers, journalists, political leaders. Stories often based on national myths, triumphs or defeats, glorious eras, shameful episodes, often exalting our own people above others.
Few Europeans, however, ever hear the most defining story of all, the story that made Europe Europe, that laid its foundations of morals, values and worldview. This story of the Gospel and the making of Europe is basic to our identity as Europeans. Even atheists readily concede this fact. Last week at the Hay Literary Festival in Wales, atheist professor Steve Jones called the New Testament one of the greatest political documents ever written, adding: ‘our entire society is based on tenets of the New Testament.’
The story of the Gospel and the making of Europe is one every Christian should know and be able to pass on. But where is it being told? One of the few places I know is the Masterclass in European Studies we are running in Wiler and Geneva next month (July 28-Aug 1). Dr Evert van de Poll teaches an excellent panoramic series on the subject. We will also learn from visits in the city of Geneva, and from stories of faithful minorities, how God often turned the tide in Europe’s past and can do it again.
This ‘big picture’ perspective is the best antidote to the growing climate of nationalistic xenophobia. For the sake of Europe’s future, we all need to know this story.
Can you see yourself joining us in Geneva next month?!
Till next week,
Jeff Fountain

Jun 28- Jul 9 •  Celtic Heritage Tour
From Dublin to Canterbury, this tour follows the progress of the gospel across to Scotland and down into England 1400 years ago.
The transformation of tribes and peoples through the message of love, reconciliation and brotherhood laid the foundation for the Irish and British societies. €1250