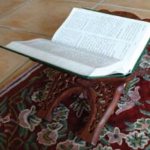 Most of us would be surprised to learn that the Qur’an speaks of Jesus as ‘the Messiah’, as ‘the Word of God’ and as ‘a Word from God’. Yet ignorance among both Christians and Muslims creates cultural misunderstandings and isolation. Education and understanding from both sides is key to defusing fear and to building relationships.
As the Muslim prayer and fasting month of Ramadan continues through to next week Thursday, literally millions of Christians around the world are praying daily for the Muslim world using the 30-days’ prayer booklets. Prayer helps us discover God’s heart for our Muslim neighbours in Europe. Prayer also exposes our ignorance and fears.
The ‘30-days’ website (www.30-days.net) has useful resources to help us grow in understanding about Muslims and Islam. For example, what does the Qur’an say about Jesus, and how can such texts be a starting point for sharing our faith with Muslims? The section ‘about Islam/Islam and the Bible’ carries the following quotes from the Qur’an, and comments as follows:
The angels said: “Mary! surely Allah has chosen you and purified you and chosen you above the women of the world. Mary! remain obedient to your Lord and humble yourself, and bow down with those who bow in worship. The angels said: Mary, surely Allah gives you good news of a Word from Him, whose name is the ‘Messiah, Isa son of Mary,’ held in honour in this world and the hereafter and of those who are near to Allah. (Al Imran 3:42-43 and 45).
The Messiah, Jesus the son of Mary, is but the apostle of God and His word, which He cast into Mary and a spirit from Him (The Women, 4:169).
Here Jesus Christ is clearly referred to as the Word of God and as a Word from God (in Arabic: Kalilmat Allah). The Qur’an seems to be echoing the text of John 1:1 in these passages: “In the beginning was the Word, and the Word was with God, and the Word was God.” However Islamic scholars argue that the Qur’anic title given to Jesus does not imply that Jesus is divine. While some Muslims know that Jesus is referred to as the Word of God in the Qur’an, the vast majority don’t know what it means. Fewer still realize the same title is given to Jesus in the Bible.

Anointed
In addition, the Qur’an speaks of Jesus as the Messiah (see 3:45 and 4:169 above, as well as 4.157 and 4.171). Here again the vast majority of Muslims have no idea what it means for Jesus to be the Messiah, because, in the words of one author, “the meaning of the title is almost completely glossed over in Islam.” The word Messiah is the same as the word Christ in Greek. It refers to the one who is anointed as king. The term carries with it not just the concept of a good king but also one who is a saviour, a deliverer, who will correct all wrongs and reign in righteousness.
Some believers have used these texts in the Qur’an to start conversations with Muslims about Jesus.

The cross
Traditional Muslims don’t believe Jesus died on the cross. Although the Qur’an refers to the death of ‘Christ Jesus, the son of Mary’ in the following passage, it is to deny the Christian version of the event:
They said boasting, “We killed Christ Jesus the son of Mary, the Messenger of Allah”; but they killed him not, nor crucified him, but so it was made to appear to them …. for surely they killed him not. No, Allah raised him up unto Himself; and Allah is Exalted in Power, Wise. (The Women 4.157-158)
There are a variety of Muslim opinions concerning the last days of Jesus and his crucifixion and resurrection. Early Islamic scholarship appears to be largely silent about the subject.
Most Muslims believe that death by crucifixion was not a worthy death for a good prophet like Jesus. Based on the Qur’anic passage cited above, they say that Jesus never went to the cross, but that he was taken up into heaven without dying. Many Muslims believe Judas was actually crucified instead of Jesus, as a punishment because of his betrayal. Others believe that Jesus was crucified but he survived and died later or that he survived, then was elevated to heaven and did not die at all.
The ‘30-days’ site suggests we pray:
• that Muslims begin to ask questions and try to understand Jesus’ titles: the Word of God and the Messiah; (the following texts can be used for prayer and meditation: John 1:1-4,14 and Mt 16:13-17);
• that Muslims come to understand why the Messiah needed to die and how His resurrection brings us new life;
• that Jesus would be increasingly revealed to Muslims as the saviour and deliverer who will correct all wrongs and reign in righteousness.
Till next week,
Jeff Fountain