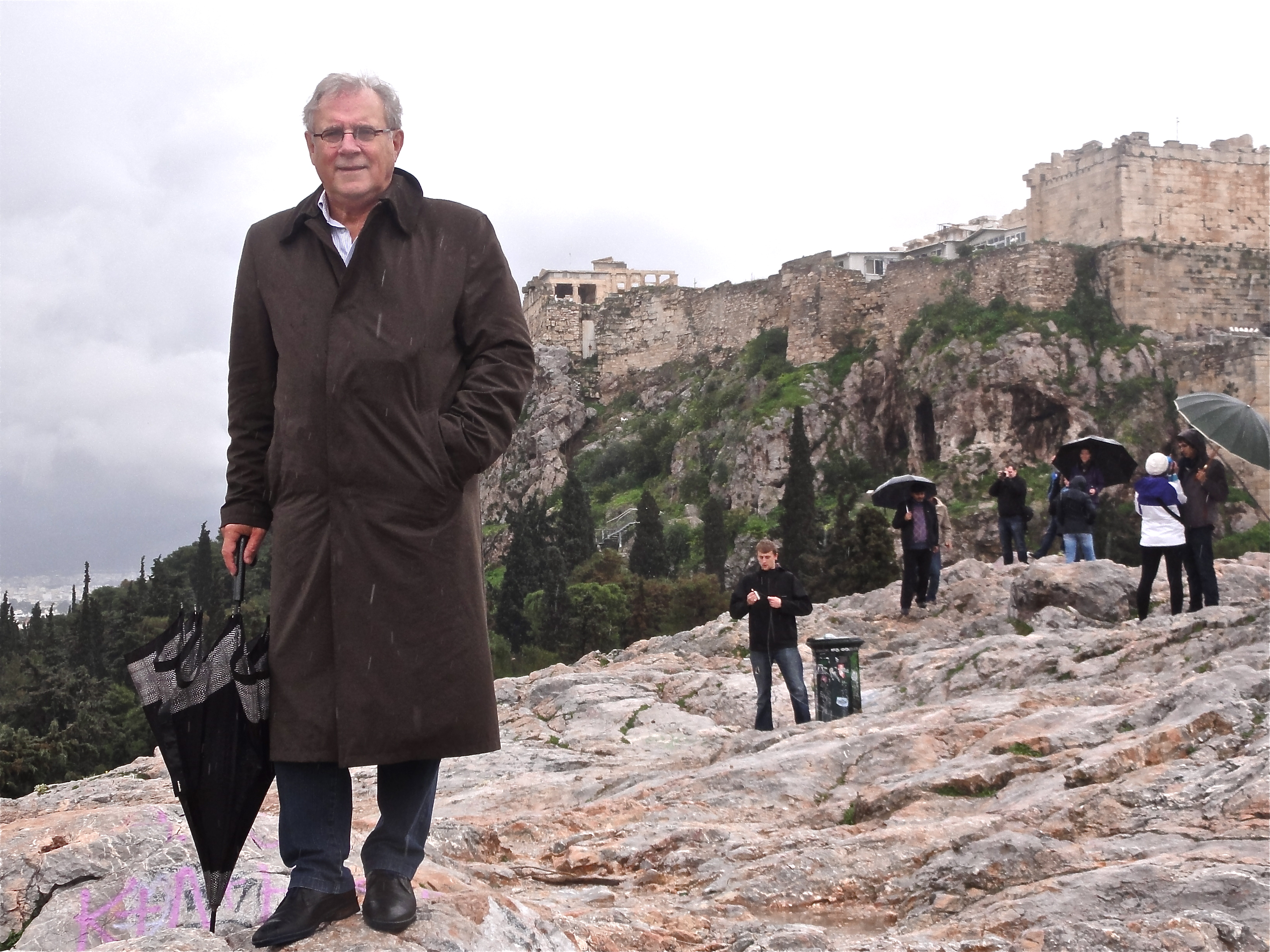 Rain drizzled all across Athens today as I stood on Mars Hill somewhere near the spot where Paul delivered his famous sermon recorded by Luke in Acts chapter 17.

Like a giant lump of volcanic pumice, Mars Hill is a rough-surfaced rocky outcrop in the shadow of the Acropolis. Here Ares, the god of war, was judged for slaying Poseidon’s son, hence the name Ares Hill (Areios Pagos), or Mars Hill as the Romans later called it. Areopagus was the name given to the council of city elders which met here. Criminal and civil cases were heard on this rock, including celebrated murder cases.
Some suggest that Paul was on some sort of trial when he stood before the Areopagus on this rock on his first visit to Athens. The accusation that he was trying to introduce foreign gods was the same that condemned Socrates centuries earlier. It was a shrewd strategy then for Paul to declare that he was talking about the unknown god already acknowledged by the locals by the altar in the vicinity.
Whatever the circumstances, this sermon is only one of two from Paul that Luke records before a pagan audience and continues to serve us as a model for engaging other worldviews, a classic encounter of Jerusalem and Athens. Today the whole sermon is reproduced in Greek on a bronze plaque by the stairs of Mars Hill.
Key issues
In just over two months, we plan to return to this spot on Europe Day (May 9) with participants of the State of Europe Forum for an early morning bible study based on Paul’s message. For it raises a number of key issues to be addressed at the Forum.
Paul told the council that ‘from one ancestor, God made all peoples to inhabit the whole earth, and he allotted the times of their existence and the boundaries of the places where they would live, so that they would search for God and perhaps grope for him and find him – though indeed he is not far from each one of us.’ (Acts 17: 26-27)
The human family all stems from one source. We have one heavenly Creator Father. Here is the basis for human solidarity. All of us bear God’s image. What is it that undermines this solidarity at personal, regional and national levels? How can we promote such solidarity, recognising that God’s end goal is shalom, right relationships, between peoples and peoples? The crises threatening Europe today–and most seriously right now in the Ukraine–force us to think hard about how to promote solidarity in Europe. Strong trends towards nationalism and looking after our own, as opposed to seeking the welfare of the whole, have surfaced recently, and not just among populists. So how do we find the right balance between solidarity, patriotism and nationalism?
Migration has always been part of the human story since even before Babel. Greece, at the crossroads between Asia, Africa and Europe, is forced to carry far more than her share of the load of those seeking a better life in Europe. How fair are the current EU rules? When we look beyond our own borders, how should Europeans share the burden? How should those of us in northern Europe be more involved? What role is the body of Christ already playing in providing shelter, food, drink and care, as Jesus commanded in Matthew 25?
Threats
Paul struck a very contemporary note given today’s economic crises when he exposed the emptiness of the gods of gold and silver. A team of top economists has been drafting proposals to bring to the table in Athens addressing the roots of both Greek and European crises.
Athens was the cradle of democracy. But what was the Bible’s influence on its development in Europe over time? And what threats does it face today?
And what is undermining the freedom to worship the true God Paul pleaded for on Mars Hill (or even other gods) across Europe, a freedom the gospel itself shaped? How can we respond for the future’s sake?
Sometimes there seem many reasons to be disheartened, yet Paul gave his listeners an ultimate reason for hope despite any current circumstances. The man God has appointed as judge of all has been raised from the dead, the promise of Christian hope. One day the books of history will be balanced. Injustices will be set right.
Paul’s message seemed foolishness to the Greeks. Yet over time his message triumphed. Today the cobbelstone road leading around one side of Mars Hill is called Apostolou Pavlou in his honour, and becomes Dionysiou Aeropagitou as it winds around behind the Acropolis, after Dionysius, the city elder converted through this sermon,.
If you would like to join us on Mars Hill on May 9 as we seek God’s wisdom for today’s challenges, you can find information and registration for the State of Europe Forum on: www.stateofeuropeforum.eu.
Till next week,
Jeff Fountain