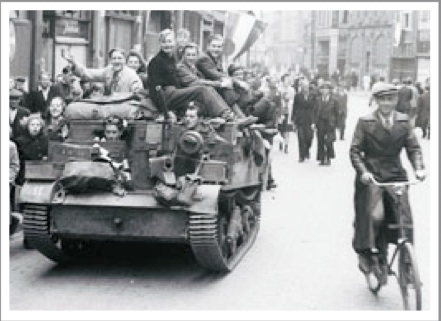 Exactly seventy years ago, Canadian troops liberated the towns of our region in the Netherlands from the Nazi occupier amidst scenes of jubilation. Commemoration events and parades in a sequence moving northwards from town to town are stirring memories of the elderly and creating memories for the young.
Some memories are painful. In our town of Heerde, a ceremony was held this past week on a bridge over a nearby canal where twenty members of the Dutch resistance as well as innocent locals were shot mercilessly by retreating German soldiers four days before the Allies arrived. The underground fighters were trying to prevent the bridge from being destroyed by the fleeing occupiers.
A few days ago, the tragic execution of Dietrich Bonhoeffer just weeks before the war's end was also commemorated around the world.
Other memories recall the joy of freedom, of reunions with loved ones, and of the restoration of normal life–even on the other side of the world. My mother has often described the moment she saw her fiancé get off the train as she waited in the expectant crowds at Auckland Railway Station. My father was returning home after four long years of separation while with the ANZAC troops in the Middle East and Europe.
Lest we forget
While the events of seventy years ago are being celebrated, we are also being reminded of the so-called Great War of 1914-18, and in particular the Gallipoli Campaign which began exactly one hundred years ago next weekend in Turkey. Allied forces tried to capture the strait linking Russia to the Mediterranean in a disastrous campaign causing the deaths of many thousands of Australian and New Zealand troops (ANZACs).
The Turkish victory was a key step towards the declaration of the Republic of Turkey eight years later under Atatürk, who first rose to prominence as a commander at Gallipoli.
Gallipoli also marked the birth of national consciousness in both Australia and New Zealand. The date of the landing, 25 April, is known as Anzac Day, a solemn day of commemoration of the fallen in both countries, starting with dawn services attended by many thousands.
On such occasions one hymn is inevitably sung: God of our fathers, by Rudyard Kipling, Nobel Prize laureate and poet of the British Empire. This hymn inspired the inscription on many war memorials in the British Commonwealth: ‘Lest we forget’.
Ironically, as those very words are sung, their original meaning has been forgotten. Kipling did not write them in reference to remembering the fallen, important as that may be. They were a prayer to God for mercy on Britain and her dominions, that they would not forget their God and lapse from the Christian faith:
Lo, all our pomp of yesterday
Is one with Nineveh and Tyre!
Judge of the Nations, spare us yet,
Lest we forget–lest we forget!
Short memories
One of the repeated instructions in the Old Testament is: 'Remember!', 'Do not forget!' Remember God's goodness, his instructions, his ways, his leading in the past. Don't forget his commandments, his blessings, his lessons. Monuments were built and feasts were held to remind new generations of God's dealings with their foreparents. Unlike any other sacred book, the Bible contains a lot of history books–both in the Old and New Testaments. They remind us that God has always been active in human affairs.
Short memories lead to short-sightedness. Unfortunately that's all too true among believers. Our perspective on the past feeds our vision for the future. Our lack of perspective on the past feeds our lack of vision for the future. Which is why we must remind ourselves how God has been at work in Europe's past. The story of Jesus has been the single greatest factor in shaping Europe's past, and will still shape Europe’s future.
In Riga at the State of Europe Forum, May 8 & 9, we will reflect on the role of biblical values in winning the war seventy years ago, in winning the peace sixty-five years ago with the Schuman Declaration, and in the triumph of truth and justice over communism twenty-five years ago. And why those same values are our hope for tomorrow’s Europe.
You could still join us there.