Our debt to the Irish

Encrusted as it was under layers of tradition, pomp and ceremony, Queen Elizabeth’s personal faith was clearly the well-spring of her devotion and service. This Christian faith, evolving through various expressions over time, has been a fundamental feature of life in the British Isles for most of the past two millennia.

So who brought the Christian faith to the shores of her reign many centuries ago?  The first official Roman Catholic missionary to Britain was St Augustine of Canterbury in 596. Yet there was clearly a long established church already there. Leaders of the existing British Celtic church, for example, refused to accept his authority after he remained seated when they came to see him.

Legend says Joseph of Arimethea was a tin merchant and visited Glastonbury and first preached to the ancient Britons, giving rise to myths about Holy Grails. One interpretation claimed Joseph to be Mary’s brother who took his nephew Jesus with him to ancient Britain, as suggested by William Blake’s hymn, Jerusalem: “And did those feet in ancient times walk upon England’s mountains green…?”)

In 580, just prior to Augustine’s coming, a Kentish prince Aethelbert married a Frankish princess, Bertha, great-granddaughter of the first Christian king Clovis in Gaul. She agreed to the marriage on the condition she could practice her Christian faith, and came to Canterbury. You can visit her little church there today, St Martins, the oldest building in Britain still in use as a church. She and her husband then hosted Augustine on his papal mission to convert the Angles.

Yet, while there is much evidence of Christianity in Britain prior to Augustine, no-one really knows who first brought the gospel to Britain. Most likely it was a combination of witnessing soldiers, traders and evangelists following established trade routes.

A very likely route for the gospel to travel to Britain was up the Rhone valley from Marseilles and Lyons, (where churches were established very early), Celtic Brittany and across the Channel.

The influence of the Desert Fathers  and Coptic Monasticism was very strong in Gaul. The Life of St Antony – father of monasticism -was a ’best seller’ leading to conversions of St Martin, St Honorat and others who established monasteries as ‘springboards for missions’.

Once the Romans left Britain, early in the fifth century as Germanic tribes attacked Rome itself, word spread among tribes in north western Europe – Angles, Saxons and Jutes – that there was land for the taking across the channel. They came in their boatloads, bringing their pagan practices with them.

Central to the story of the conversion of the British Isles is the story of Patrick. Trafficked to Ireland and slave labour from Britain’s west coast late in the fourth century, he eventually escaped to Gaul and lived for a while in a monastery. After returning home to Britain, he dreamt of Irish people calling: “We beg you, holy boy, to come and walk again among us.”

So in 432 he embarked on a remarkable mission to his former captors, confronting druidic spirituality. Within his lifetime, Ireland was largely evangelised and became known as the ‘island of saints’. Patrick reputedly planted 200 churches and baptised 100,000 converts. Unlike in the Roman world, Ireland had no urban centres. A network of monastic communities mushroomed around the whole island, becoming  centres of culture and learning popular among the young. Some became communities – ‘monastic cities’ – of up to 3000 ‘monks and virgins of Christ’!

As the Roman civilisation was collapsing on mainland Europe, these centres of learning preserved and copied priceless manuscripts of scriptures and classical learning. Young people flocked to them from the Irish elite as well as from Europe. They were the Oxfords and Cambridges of their day. With mission fervour, such communities were established in Scotland (Iona) and Northen England (Lindisfarne) to become springboards for the evangelisation of the Scots, Picts, Angles and Saxons.

This mission movement spread from the north down towards the Midlands as Augustine’s mission began to spread upwards from the south. Monastic settlements became the building blocks for the new order emerging from post-Roman chaos. Other Celtic missionaries went directly from Ireland to the continent, spreading across Gaul to today’s Switzerland, Austria and Italy, the Low Countries and Germany, and even right across to Kyiv.

This week Romkje and I criss-crossed Ireland with two car-loads of fellow pilgrims on our first on-location (mini-)heritage tour since COVID. We visited key monastic sites, reflecting on them as the well-springs of so much of the spiritual culture of both the British Isles and the continent over the following centuries.

How much we – in Britain, Europe and far beyond – owe to the often-forgotten legacy of these intrepid Irish missionaries!

Write to me for the zoom link: jeff@schumancentre.eu

One response to “Our debt to the Irish” 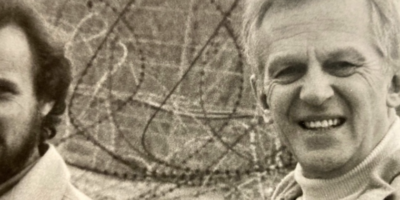 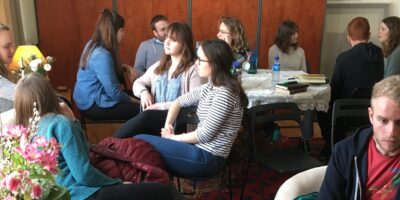 Coming up this year?