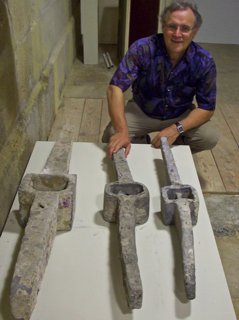 Paul’s landing on Malta nearly two thousand years ago was a great deal rougher and wetter than mine was last week. But our separate visits to the island had something in common: we both experienced the ‘unusual kindness’ from the ‘islanders’ referred to by Luke in his detailed account of the famous shipwreck.

My three-day stay was not as accidental as Paul’s three-month layover (Acts 28). Some time ago, I received an invitation to speak there at the annual retreat of a Catholic charismatic community–very gracious, in view of my own Baptist background.

When later I read that the YWAM sailing vessel, s/y Next Wave, would also be in Malta at the same time, my anticipation doubled. In the several years of her sailing and training ministry around Europe and the Mediterranean, I had never been at the right place at the right time.

Grasping my opportunity, I booked a flight a day early to spend time with the crew and students on board.

Half an hour after landing (as in Paul’s story, everyone on board my craft also survived), I was on my way with Rob Clarke, the visiting on-board DTS speaker,  towards St Paul’s Bay where the Next Wave was anchored. As we negotiated the narrow streets down towards the port dotted with curiously-shaped fishing boats, the white ketch with her two tall masts and clipper bowsprit dominated the view of the bay.

Within minutes we were whisked out to the vessel in an inflatable dinghy and clambered up the rope ladder to the deck, to be welcomed aboard by the skipper, Lehman Franklin. Rob, who had sailed with the vessel from Sicily, wasted no time in producing a pair of swimming trunks. I found myself leaping from the deck into the sea after him and swimming around the ship.

A chart in the main cabin traced the vessel’s voyages in the Mediterranean Sea, resembling a map of Paul’s missionary journeys. Crew and students shared with me stories of  port calls in the Black Sea, Greece, Italy and Sicily. Many doors had opened with local churches wherever they had gone. While ships are not new for us in YWAM, I was impressed with how strategic the work of this ship was, steadily probing Europe’s ‘underbelly’, the southern coastline where we have been least active.

Standing on the deck, I could see a large statue of St Paul  on the northern arm of the bay, marking the spot where tradition held the ship to have been wrecked.

I recalled reading somewhere an account about an American explorer* who had concluded that St Paul’s Bay did not match the description in Acts. He studied the clues from Luke, (a north-easterly wind, a sandy bay, a reef, a place where the ‘waters meet’, an unrecognized coastline…). With the help of the Maltese Navy and US Coastguard computers, he had deduced the most likely site to be further south, at St Thomas Bay.

Hoping to launch a diving expedition to look for the four anchors cut loose by the sailors in 90 feet of water (Acts 27:40), he discovered that local divers had already found four metal stocks (crossbars) exactly where he had predicted. Two, he was horrified to learn, had been melted down for diving weights; a third’s whereabouts was unknown; but a fourth was the possession of the widow of a diver who had died over thirty years ago. It was now somewhere on display in a maritime museum.

The next day at the conference, I referred to Paul’s shipwreck to introduce the chosen theme, Living as a people of hope, based on the title of my book. Luke wrote (Acts 27:20): ‘we gave up all hope of being saved’. Paul however, did not. He drew his hope not from circumstances, but from the word God brought to him in the night that everyone would be saved. Paul’s hope, his anchor, was grounded in God’s person, purposes and promises–not his own circumstances.

For hope, I explained, was symbolised in Hebrews as an anchor, sure and secure. Luke’s account of the shipwreck mentioned several anchors; a sea anchor to stabilise the boat in the driving storm, and the four stern anchors the sailors dropped as they realised they were nearing land.

I mentioned in passing the report that four anchor stocks had apparently been found in St Thomas’ Bay on the south-east coast, and a few heads nodded in the audience.

Straight after my talk, a young woman introduced herself to me as Elena. Her father, she said, was the diver who had found the metal stock. ‘I know it very well,‘ she said. ‘We used to see-saw on it!’

The next evening, Elena, her husband and my host couple demonstrated the ‘unusual kindness’ of the Maltese, taking me to a candle-light festival in Birgu, across the Grand Harbour from Valetta. Little has changed in this city built by the Knights of St John since the Great Siege in 1565, when the knights heroically repelled an overwhelming Turkish naval force.

Strolling along a promenade still abuzz with people shortly before midnight, we were surprised to discover the Maritime Museum was still open for the festival! Elena rushed us inside and led us straight to her father’s anchor stock on display, with several other similar discoveries.

She posed for me beside a huge reconstructed wooden anchor of a first century ship, complete with an identical metal crossbar, similar to those which Paul’s sailors had cut adrift.

We’ll never know for sure if Elena’s father had found one of the very anchors Luke wrote about. But it gave me a buzz to imagine such a direct link with this dramatic Biblical event.