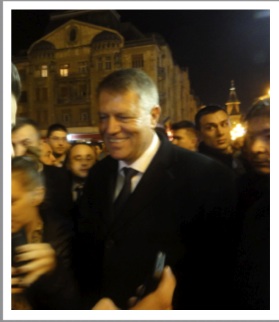 The Peace on Earth declared by the angelic choir two thousand years ago still seems to be a long way off as we approach yet another Christmas Day. As does Isaiah’s promise of the Son’s government and peace of which there would be no end.

Peace in the Middle East seems especially elusive. And we hold our breath wondering what unpredictable behaviour the New Year will yield from a threatened Vladimir Putin. And yet Mary’s song, the Magnificat, in Luke’s gospel, offers us hope. Mary recognises that Almighty God has done great things for her personally: 49 for he who is mighty has done great things for me.
At the same time, through the Incarnation, God was breaking into human affairs to work out his ‘government and peace’: 51 He has scattered the proud in the thoughts of their hearts; 52 he has brought down the mighty from their thrones and exalted those of humble estate; 53 he has filled the hungry with good things, and the rich he has sent away empty.
Last week in Timisoara, the people were certainly celebrating how God had brought down the mighty from their thrones twenty-five years ago. The People’s Revolution there began with a few church members who dared defy the Romanian authorities by  surrounding their pastor’s house when the police came to arrest him, as we wrote last week.
Integrity
Also in Timisoara last week to celebrate with the people was the newly-elected president, Klaus Johannis, whose victory at the polls, local believers told me, was an unexpected answer to prayer. Johannis is both an ethnic German and a practising Lutheran, normally a fatal combination for anyone running for national office in Orthodox Romania.
But his reputation for integrity, anti-corruption policies and getting things done swept him into office with a large unexpected majority. His popularity was obvious as he made his way slowly through the crowd cramming the Victory Square last Tuesday evening towards the Culture Palace, shaking hands–mine included–and stopping for people to make selfies with him.
In this same square on December 17, 1989, soldiers had opened fire killing about one hundred unarmed  civilians, whose names were now displayed on giant openair screens along with banners declaring, Heroes never die! Coloured candles formed a large cross in front of the Culture Palace and more were laid on the steps of the Orthodox Cathedral at the other end of the square where protestors had died vainly trying to reach the shelter of the sanctuary.
The message that truth, love and justice prevail was what had brought me to Timisoara, along with old friend and Ywam colleague Al Akimoff, and Polish professor, Monsignor Piotr Mazurkiewicz. Schuman Centre events commemorating the 1989 People’s Revolution, reflected on the role of Bible smuggling and on the spiritual roots of the overthrow of communism, not only in Romania but across Central and Eastern Europe.
For while it may seem that the wicked do prosper, as the psalmist sometimes complained, Mary’s song tells us that God does have the last word. The internal inconsistencies of any system closing God out of the picture, whether communism, fascism or the ‘soft-totalitarianism’ of neo-liberalism and secularism, will not be sustainable.
In a seminar hosted by the chief librarian of the University of Timisoara, we reflected on the role spiritual dynamics may have played in the revolution of the human spirit, a role often overlooked by political and historical commentators. To what degree could the the revolution be described as ‘the triumph over tyranny of the ‘soft powers’ of love, truth and justice’?
Catalyst
Many point to Gorbachev and Reagan as the key actors in the drama–and their role was indeed significant. Others argue that economics or the arms race were the crucial factors–and important they were. Yet others talk of the historical inevitability of the triumph of liberal democracy and of the ‘end of history’ having been reached.
At least a decade earlier, however, a spiritual revolution had been ignited primarily by Vaclev Havel, John Paul II and others. While still in prison in the 70’s, Havel called for a fifth column of people ‘who would straighten their backbones’ and live consciously and deliberately for truth, responsibility, solidarity and nonviolence. But how to get enough people to do so?
The answer came when JP II was elected as pope, and declared to a million of his fellow Poles gathered in Warsaw in 1979: ‘Fear not!’ That was the catalyst for a revolution of the human spirit that took root in Poland with the trade union Solidarność, spreading to East Germany, Hungary, Romania, Czechoslovakia and the Baltics, and eventually shattering the Soviet empire itself.
This week around the world, we celebrate the coming of the greatest Revolutionary who continues to do great things for us personally, and who is still bringing down the mighty and exalting the humble.