‘We cannot aim at anything less than the union of Europe as a whole.’

These emphatic words–we may be surprised to learn–were pronounced by Sir Winston Churchill at the Congress of Europe, held in The Hague in May, 1948. Representatives from many western European nations met together in the stately 13th century Ridderzaal (Hall of Knights) to explore Europe’s future. This landmark conference boosted the creation of a European Assembly (later the Council of Europe) and helped shape public opinion towards European unity.

Seventy years later, Piet Hein Donner, a wise old man of Dutch politics, addressed a two-day Sharing Europe Congress I recently attended in The Hague commemorating the original event. In the same distinguished venue, the vice-president of the Dutch Council of State reflected on the state of Europe today in the light of the original congress.

He began by reminding us of Europe’s desperate state after two world wars in one lifetime. “Millions of displaced persons were on the move. Violence was still rampant in many parts of Europe. All European nations faced the immense task of reconstructing society from the ruins of absolute war. And over it all lay the shadow of yet another totalitarian regime that threatened to engulf Europe.

“Two years later the feeling of despondency was even deeper. There was a growing sense that war, once again, was inevitable. It needed a bold step to break out of the mould of national thinking. The agreement to put the coal and steel industry, the powerhouse of national economies, under a common administration, turned a zero sum stalemate into a non-zero sum dynamic. That started the miracle of a deeply fractured continent, boiling over with mistrust, hatred and painful memories, turning itself into a striving area of prosperity, democracy, open society and the rule of law.

“Now, seventy years later, our material situation has improved beyond what was imaginable for our forebears, but in some ways we are as confused as they were. The long period of peace, prosperity, growth and expansion of the European Union that culminated in the years after the fall of communism, has soured in ten years of stagnation and crisis. Growing segments of the electorate are turning towards the pied pipers of nationalism, closed borders and national control, that have sprung up all over Europe.”

Debate had falsely polarised between national autonomy and European cooperation, he observed.  Sovereignty was a hollow concept in a world where each state was dependent on others for its prosperity, security and viability of policies. Reasserting autonomy would only adversely affect the capacity of both the Union and its member states to cope with the challenges of modern society. Viable national states would not be the result; rather, general impotence and the marginalisation of all European states, he warned.

“Open society, cultural diversity and the rule of law itself is at stake. Economic interests and the fears of popular majorities will easily take precedence over individual rights, ethnic diversity and the interests of minorities. These ‘darker’ tendencies in society have been kept in check by common purpose, mutual trust and common institutions of the rule of law: the European Courts, the Charters and the European legal order. However these run the risk of being among the first victims if states revert to national autonomy. Even in the United Kingdom it seems as if the single most important issue in the Brexit negotiations is how to get away from the jurisdiction of the Court in Luxemburg.

“The essence of Europe is people. Europe isn’t realised by itself. Europe is too important an idea to leave in the care of governments and politicians to implement. But it starts with the recognition at all levels of society, that European cooperation is not part of the problem as an unwanted restriction on national policy, but part of the solution of the many challenges we face in a modern society.

“But the problems our fathers faced when they met here seventy years ago were even more daunting–and they didn’t have the reassuring experience of sixty years of successful cooperation. Our material conditions have improved radically. And while our forebears had to take up the challenge of constructing Europe in a continent that was destroyed by war and divided by barbed wire, hatred and mistrust, we live in a world where we profit from sixty years of trust and peaceful cooperation and where we have all the possibilities we want to move around, meet who we want and cooperate with anyone we like.

“That is the solid basis on which a European future can be built,” he urged.

One response to “Seventy years later” 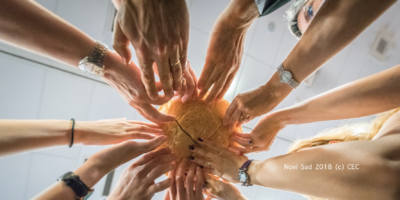