The Games are over 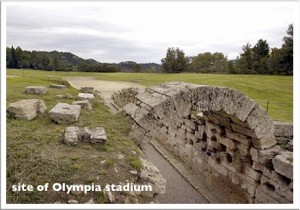 Amidst a blaze of fireworks at midnight last night in London, the Olympic Games were declared ended and the flame was doused. Now its Rio’s turn in four year’s time. But when the Roman emperor Theodosius declared the Games over in 393, it took another 1600 years for the flame to be relit.
Theodosius II, thirty-five years later, ordered the Roman army to demolish Olympia’s stadium, a grand iconic symbol of the achievements of the human body that could seat 40,000 spectators. And so a classic era was permanently obliterated, all in the name of Christian intolerance towards paganism–so we are often told.
Times and standards change, but even today’s audiences would be shocked by some of the violence tolerated or even encouraged to please the crowds in Olympia. While the introduction of women’s boxing and taekwondo has not been without controversy in the current Games, the pankration of the ancient Olympics was a no-holds brawl mix of wrestling, boxing and street fighting in which kicks to the groin, deliberate dislocations of shoulders and ankles, and chokeholds were all a part. One notorious combatant was dubbed Mr. Digits for specialising in breaking his opponents' fingers.
A certain Damoxenos is reported to have pierced his opponent's rib cage jabbing him with his fingers sticking straight out, and yanking out his intestines!
The rise of Christianity led directly to  the end of the Games in their classical form, not because of sport being antithetical to the Christian faith–few would argue that–but because of the association with violence, immorality and pagan worship.
The influence of Ambrose, bishop of Milan, on Theodosius’ personal faith resulted in the ban on pagan sacrifices throughout the empire, not only a central part of the Olympic Games every four years, but also of daily life.
For better or for worse, Christendom was emerging and would be the major factor in shaping the lifestyle and values of the European peoples for over a millennium.
Masterclass
How this happened, and what the consequences have been for today’s Europe is the subject of a masterclass taught this week by Dr James Kennedy, on ‘The Christian roots of Europe’, which I will attend in Leuven starting today.
I am relishing this opportunity to develop a stronger academic base to the work of the Schuman Centre as we attempt to recover perspectives on the profound influence the story of Jesus has had on shaping Europe’s past.
As we have suggested over recent weeks, the influence of Christianity in shaping today’s sports world is profound yet largely unknown or ignored. That is true for so many other fields including education, healthcare, politics, art, literature… and on the list goes. Recovery of such understanding is key to recovery of confidence and vision concerning the shaping of the future.
Late next week, Romkje and I head for Ireland, both sides of the border, on a working holiday. We visit Dublin in preparation for next year’s State of Europe Forum to be held there around Europe Day, May 9, hopefully at Trinity College, while Ireland holds the EU presidency.
We will also be investigating possibilities for a Heritage Tour through the British Isles sometime in the future.
Values-driven movement
On our return home, we attend part of the YWAM Global Leaders Gathering in Harpenden, north of London, where several hundred leaders from around the world meet to explore how the mission can develop further as a values-driven movement without becoming a top-heavy hierarchy.
Back in Holland, we begin to prepare for the next Evening School for European Studies in Amsterdam, starting October 4 through to March 28. This is one of several ways you can also trace the story of those who shaped Europe by their faith, reflect on our responses to the challenges of secularism, Islam and new spirituality today and consider what it will take to restore faith, hope and vision for the future. The course is also available as the European Studies Course Online, and through next year’s Summer School of European Studies. (See www.schumancentre.eu)
The next ww will appear when we are back in Holland, on September 10.
So, till then,
Jeff Fountain