A generation ago, Corrie ten Boom was one of the most famous women in the Christian world.

Last week, 15 April, would have been her 129th birthday. It was also the day she passed away in 1983 after five silent years in a coma, her 91st birthday. This week her Dutch publisher Uitgeverij Gideon reported that despite fewer overall sales during this corona year, sales of her books had increased.

Her 1971 autobiography The Hiding Place, co–written with John and Elizabeth Sherrill, was once on the bookshelves of literally millions of homes around the world. Likewise the Billy Graham-sponsored film of the same name brought her story into countless homes, schools and churches: a story of sheltering Jews, of imprisonment in Nazi concentration camps, of her own surprise release and of her world-wide mission to spread a message of forgiveness. If evangelicals had recognised ‘saints’, she would have been one.

Corrie was an irrepressible book writer. When she was 85, prior to her final move to California, Romkje and I visited her at home close to Haarlem and her father’s watch-repair shop. ‘Tante Corrie,’ I said, ‘you must be so busy writing your new book.’ ‘My new book?!’ she replied. ‘My five new books!’

Among her many titles, Tramp for the Lord tells about her travels after the war sharing the message of love and forgiveness in some sixty countries worldwide – in Africa, western and eastern Europe, the Americas, Asia and even the communist-controlled Soviet Union, Cuba, and China. Defeated Enemies was the first of her books I remember reading as a teenager, soon after becoming aware of the work of the Holy Spirit. A prisoner… and yet was her first book, relating concentration camp experiences she shared with her sister Betsy.

After returning home from the Ravensbrück concentration camp, Corrie set up a rehabilitation centre in Bloemendaal for other concentration-camp survivors. This was to fulfil a dream Betsie had had in the camp of setting up such a centre, decorated with colourful flowers expressing the creativity of the Creator.

Corrie was virtually the ‘godmother’ of Youth With A Mission in the Netherlands. She had met YWAM’s founder Loren Cunningham on her travels and thrilled to the vision of teams of young people telling the same message of love and forgiveness, not waiting until they were in the second half of life as was she. ‘I wish I was a youth,’ she was often heard to exclaim, ‘so I could be part of Youth With A Mission too!’

During the 1972 Munich Olympic Games, Corrie did join the thousand YWAMers housed in the Hurlach castle west of Munich, half of whom travelled each day to the Olympic grounds for evangelism while the other half stayed at the castle for teaching from Corrie, Loren and others. Her 25-year-old secretary, Ronnie de Graaf, had recruited fifty Dutch participants for the Munich Olympic outreach – thirty of whom would go on to full-time mission engagement.

(Hear Corrie’s message to the YWAMers on the classic film Revolution of Love about this Olympic outreach.)

The following year, with Corrie’s encouragement, Ronnie and others registered YWAM in The Netherlands as Jeugd met een Opdracht. JmeO’s first filing cabinet was Corrie’s clothes closet where Ronnie kept address cards while her boss was away travelling.

Ronnie accompanied Corrie to the 1974 Lausanne Congress on World Evangelisation where the 82-year old was one of just a handful of women speakers. When men objected to her as a woman speaker, she used to say: ‘But I’m only speaking to the women – if the men want to eavesdrop, that’s fine!’ Corrie told the 2500 delegates how the Holy Spirit had given her grace to forgive a prison guard she later met in Germany who had been so cruel to her dying sister.

Two years later, Ronnie – who by now had changed her name back to her original birth name, Romkje – introduced her new friend to Corrie to get her blessing before becoming engaged. Fortunately for the undersigned, Corrie did approve.

On May 6, Romkje will tell about lessons she learnt from working with Corrie in a livestreamed interview from Look Up, the JmeO bookstore/gallery /cultural centre in the heart of Amsterdam: Facebook: https://fb.me/e/1oe4SCXQ5; YouTube: https://youtu.be/Y4A65zTS8oQ

You can also sign up through Eventbrite and get email reminders of the event: https://www.eventbrite.nl/e/corrie-ten-boom-and-me-tickets-152090836787

More videos and recordings of Corrie can be found on Youtube.com (search ‘Corrie ten Boom’). A google search for Corrie’s books will lead to a wide range of titles with their ever relevant content.

One response to “The ‘Godmother’” 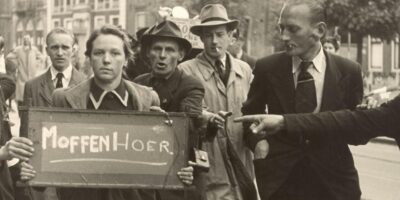 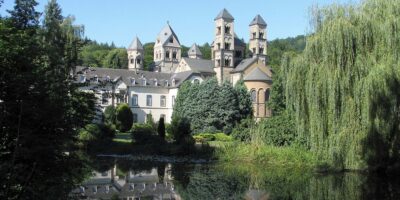