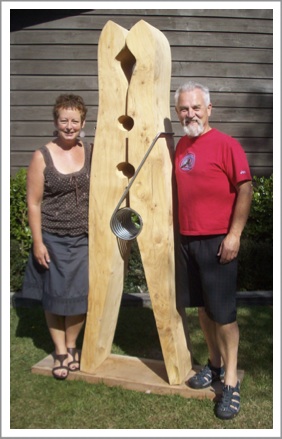 While visiting a sculpture park in New Zealand some time ago, my wife and I came across a giant clothes peg standing well over two metres high. Yet the one word on the name board made us see this common household object in a totally new perspective.
For this oversized yet familiar, everyday gadget was simply entitled: ‘Marriage’. With artistic imagination, sculptor John Ferguson (pictured here with his wife) revealed in the clothes peg a powerful metaphor of the joining together of a man and a woman in covenantal wedlock into a new unit.
For a clothes peg consists simply of two loose elements bound together by a spring, without which the parts lack a common function. It is the spring which creates one new entity out of the two with a new purpose.
The binding element in marriage is the covenant, the vows made for life to each other: before God, family, friends, church, state and community, all of whom from that moment on recognise the two individuals as a new social unit, a married couple, potential family-builders.
This simple but powerful image is worth reflecting on this particular week, which culminates on Saturday in Valentine’s Day. That fact can’t escape us as shops and hotels barrage us over the next few days with ideas about how to spend money on our partners–not really a bad idea.
Maintenance
Nearly twenty years ago, a young man named Richard Kane stood in the check-out line at a home decoration store watching couples in front of him spending money on improving their homes. How much money and effort, he wondered, do these couples spend on improving their relationships? Pondering further on this question, he wondered why it was that men took car maintenance for granted but gave little time or effort to marriage maintenance.
Why not then start a special week giving attention to marriage? he thought. For nearly two decades, now, Richard has launched Marriage Week in Britain with leading politicians and public figures participating. He began promoting articles in newspapers, programmes on radio and television, special concerts, dinners and other social events all reflecting on marriage. The idea has spread now to over thirty countries world-wide with new countries joining each year. Professional research has been commissioned in different countries on the state of marriage and the cost to society of marriage breakdown.
And none too soon. For, along with motherhood, heterosexual marriage as a time-honoured institution is these days under attack as out-dated, bourgeois and moralistic in a hedonistic society increasingly obsessed with sexual gratification and fifty shades of porn. The marriage certificate is nothing more than a piece of paper, so why bother? Society and social order, we have been told since the time of Thomas Hobbes, is based on a social contract between independent individuals and a state to which we submit in return for protection. Society basically is made up of rational self-seeking individuals, we’re taught. At best, marriage is also a social contract of mutual convenience between two consenting adults, which may or may not outlive its usefulness.
Covenant
But the biblical narrative gives us a different understanding of marriage: the primary social bond is not the state, but marriage. This is a bond of identity. The central figure is not ‘I’ but ‘we’, of which I am a part. Individualism is not part of Ultimate Reality, the Triune Godhead. Humans are social beings, created for relationship and find identity in relationship: marriage, family, community, the nation understood as extended family, and humanity as a family of nations under God’s parenthood.
Self-interest is not the driving force of this scenario. Rather it is the Hebrew concept of hesed, or covenantal obligation–duties which flow from belonging. In the biblical view, society is not based on contract but rather on covenant, a binding relationship based on loyalty and faithfulness even when things get tough.
A society based on contract is held together by external force, ultimately the state’s monopoly on coercive force. A society built on covenant is sustained by internalised commitment, faithfulness, hesed.
In marriage, this is the spring in the clothes peg: the vows, the promises, the covenant made ‘for better, for worse, for richer, for poorer, in sickness and in health, until death do us part.’ Such relationships need nurturing and sustaining, rekindling and stirring the embers of passion and love.
Which is what Marriage Week aims to do. As Richard puts it: “If you are fortunate to be in a marriage, you should look after it; and work on improving your relationship, on making a good marriage even better.”
Let’s do it!
Till next week,
Jeff Fountain

0 responses to “The primary human relationship”