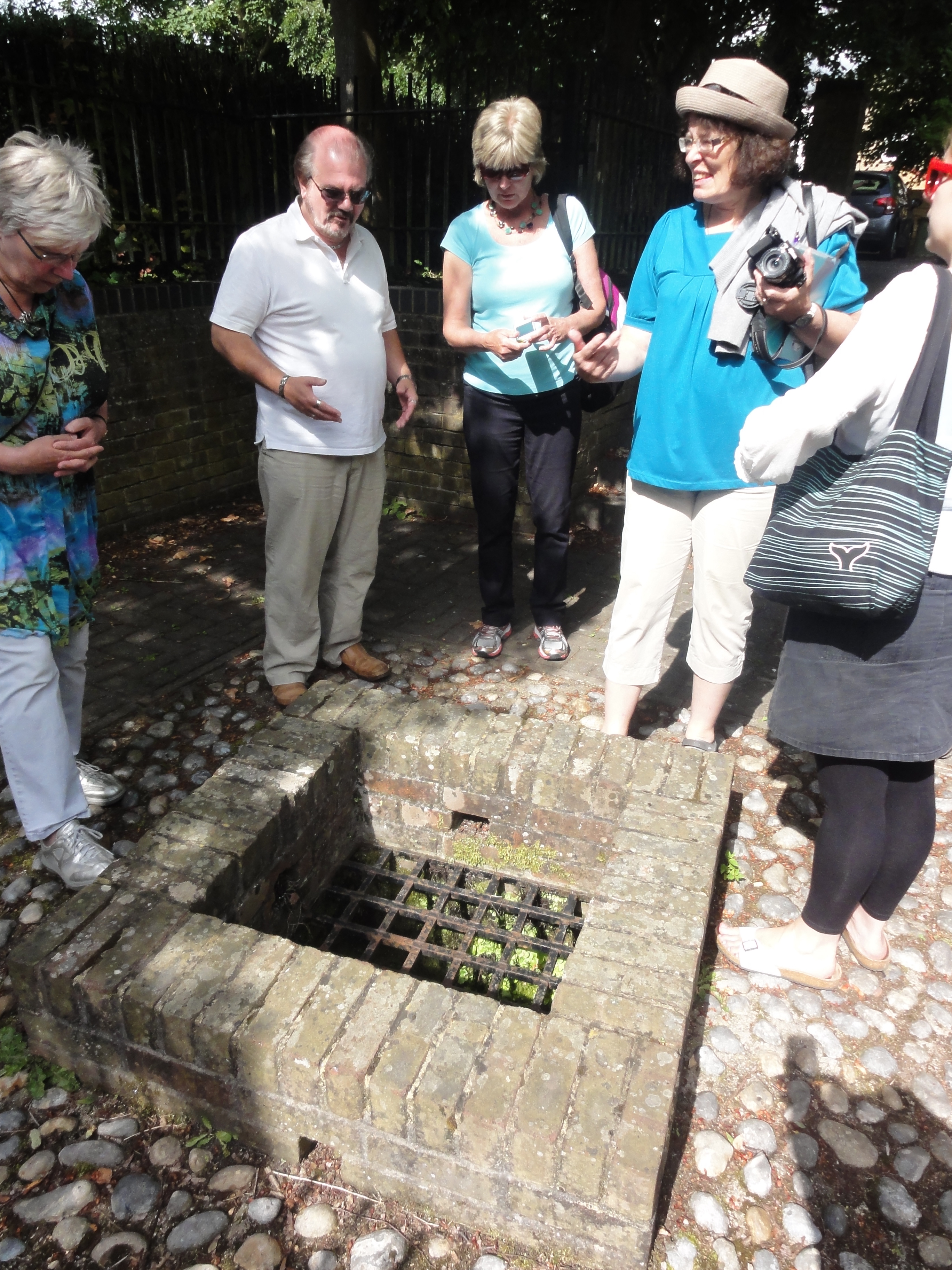 Remember that childhood joke about the story of the three wells: ‘Well, well, well’? Well, here’s a story about three wells we visited on our Celtic Heritage Tour through Ireland and Britain, reminding us of the significance of wells  both physically and spiritually in ages past.
Today we take running water for granted. City water supplies, underground pipes, plumbing throughout our homes–especially flushing toilets–makes water an ever-present reality that we only stop to think about when it gets turned off.
We forget how recent in human history this luxury was developed. In the mens toilets at John Wesley’s Chapel in City Road, London, we saw a sign explaining that everything was still in its original Victorian state, except for the flushing tanks. Another sign clarified some toilet myths about Thomas Crapper, who did develop the ballcock mechanism of the flushing watertank in the nineteenth century, but whose name was not the derivation of the vulgar term for what took place in the closet.
Anyway, back to the wells.
Water and wells have always been essential for human settlements, and monasteries were often located at sites of wells, or by rivers and lakes. In pre-Christian times, as in biblical times, wells and springs signified life, healing and prosperity. Wells played crucial roles in the biblical stories of Abraham, Isaac, Jacob, Moses and Jesus. And they feature also in the stories of the pioneer missionaries who brought the gospel to Celts and Anglo-Saxons from the sixth century.
Often these stories involved miracles and supernatural events, some of which are simply unbelievable–like heads being cut off and then being stuck back on. For Protestants, such legends were thrown out along with monasteries, praying to the saints and other practices considered unbiblical.
Fascination
Sometimes we risk throwing out the baby with the bath water. Those exploring ways to connect with the growing numbers of spiritual seekers are realising the fascination wells hold for many today. Following Jesus with the Samaritan woman, they are wanting to initiate conversations about the true source of living water.
Off the beaten path in Ireland, we discovered the site of the first monastery founded by St Columba, in Durrow. (Later he went on to establish the famous Iona monastery off the coast of Scotland.) Down a path towards a beautful shady glade, we came to St Columba’s well with a stone tablet dated AD 550, and a stone igloo-like roof protecting the water.
Today there is no sign of the monastic community that thrived here for centuries. The stones were taken away to build a Norman castle. But this was the well which had sustained the life of the community which in turn had produced the famous manuscript gospel compilation called the Book of Durrow we had seen earlier in the Trinity College library in Dublin.
A few days later in Lichfield, England, we were led to the well of St Chad, the pioneer missionary to the inhabitants of Mercia. Chad’s mission, launched from Lindisfarne, marked the beginning of the conversion of the English-speaking peoples, which had huge consequences for world history. Chad, some say, would stand naked in the cold water to pray. We didn’t follow his example, but two years ago YWAMer David Pott inaugurated a pilgrimage from Chester to Lichfield, ending at this well.
Reflections
At St Albans, north of London, Steve Hollinghurst told us the story of the first British martyr, a pagan Roman-British soldier converted by a travelling missionary in the third century. He helped the missionary escape by putting on his cloak to fool the soldiers hunting for him. At his trial he declared ‘I worship and adore the true and living God who created all things’. His head was chopped off, and–according to legend–rolled down the hill until lodging itself in a holly bush, where a well sprang up.
We followed Steve, himself a pioneer in ministry to spiritual seekers, down the hill to a housing estate called Holywell Lodge. In the centre of a small hedged enclosure was St Alban’s well. We peered into the well expecting to see our reflections. Instead, we could only see soft drink cans and other junk at the bottom.
Perhaps that was a true reflection of our times when the wellsprings of the lifesource from which sprang Europe’s values and institutions have become clogged with the clutter of homo consumus.
Our challenge is to re-open these wellsprings of life.
Till next week,
Jeff Fountain