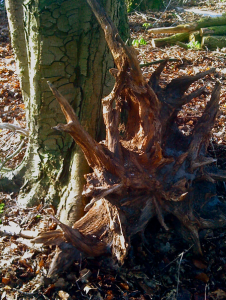 Dare we dream, like Robert Schuman, about Europe becoming a ‘community of peoples deeply rooted in Christian values’, as we wrote about last week? Today that sort of talk raises eyebrows in many political and academic circles in our multi-culti world.

Well, let’s ask ourselves, honestly, what other roots are there?

Roots are not things we invent. They are what can be discovered, what is there to be dug up. In the natural sense, roots are what a tree, a plant, a flower has grown from: a seed that has taken root. From which seeds and roots has Europe grown?

Roots nourish and stablise. What happens when a tree, plant or flower is cut off from its roots?

In a relativistic, post-modern age, it is politically incorrect to claim priority for any one worldview over another. The claim that Europe’s roots are primarily Christian is ignored today in the light of the presence of many later competitors. Hence the rejection of the mention of God and the Judeo-Christian tradition in the proposed European Constitution.

Yet, what was the real source of Europe’s basic values? Is that a matter of conjecture? or of historical fact?

Pope John Paul II was prepared to admit freely the following: “Multiple are the cultural roots that have contributed to reinforce (Europe’s most precious) values: from the spirit of Greece to that of Roman law and virtue, from the contributions of the Latin, Celtic, Germanic, Slav and Finno-Ugric peoples, to those of the Jewish culture and the Islamic world. These different factors found in the Judeo-Christian tradition the power that harmonised, consolidated and promoted them.”

Yet the pope stressed that the diversity of cultures making up Europe’s heritage found their unity in the biblical tradition. Now, of course we expect a pope to say such things. But even arch-atheist Richard Dawkins candidly admits we cannot understand European history without understanding Christianity and the Bible.

On that point at least, Dawkins is right! Where did Europe gain its cohesive and distinct identity from, as ‘The Continent’? It’s the one continent that is not a continent! It is merely the western peninsular of the Eurasian landmass.

The European peoples came largely from the east with the great people movements arriving in waves before the end of the first millennium after Christ. They spoke Indo-European languages. They worshipped many gods. The Europeans’ identity was rooted in the east. So at what stage did they develop a distinct western identity?

Answer: When story-tellers came with a Book telling the people groups living in the west Eurasian peninsular about Jesus, God’s Son. Converted to Christian monotheism, these peoples of diverse cultures, languages and thought, from Ireland to Armenia, now shared a common basic worldview with values drawn from the teachings of one man: Jesus of Nazareth.

This phase, historians tell us, laid the foundations for what was to emerge as a self-conscious geographical identity calling itself Europe, distinct from its Asian background.

German sociologist Jürgen Habermas is one of the world’s most influential secular philosophers. Yet he concedes that there is no alternative to Judeo-Christian ethics for grounding freedom, solidarity, emancipation, morality, human rights and democracy.

‘Universalistic egalitarianism… is the direct legacy of the Judeo ethic of justice and the Christian ethic of love.

‘Up to this very day there is no alternative to it.’

Dutch philosopher Evert-Jan Ouweneel, at last week’s Schuman Centre launch in Brussels, looked at four values Schuman identified as European–freedom, equality, solidarity and peace–and asked what happened to each of these values when cut off from their Judeo-Christian roots. His conclusion was that Europe’s core problems stemmed from the loss of roots, and that the Christian faith could prove again its vital contribution to European society through the recovery of these values.

‘No-one wants to return to the old days of cultural Christianity in Europe,’ he concluded, ‘but there is no reason for us to be timid about the Christian roots of Europe’s most respected values.’ *

*soon to be posted as video on www.schumancentre.eu