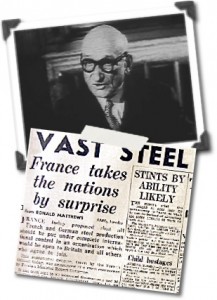 Sixty years ago, Europe was a mess!

Hitler’s defeat did not automatically guarantee peace across a devastated and divided continent. Chaos threatened on all sides. Hatred and bitterness towards the enemy poisoned grass-roots attitudes among conqueror and conquered alike. Hunger, poverty and unemployment added to the miseries of injury and upheaval.

My generation and my children’s generation have never known the climate of mistrust and suspicion, crisis and conflict that dominated Europe immediately after the war.

Euphoric scenes of flag-waving crowds welcoming victorious troops had quickly given way to the daunting reality of rebuilding a devastated and divided Europe. But how? On what foundations? With whose values?

What could be done differently this time to break the seemingly-inevitable cycles of war among Europe’s tribes?

France and Germany in particular, with their central geographical location, had habitually behaved like alley cats scrapping over morsels of borderlands, repeatedly dragging their European neighbours into fully-fledged fights. Twice in the first half of the twentieth century, European brawls–with these two nations in the thick of it–had become global conflagrations.

Families of each generation had lost loved ones. Young men grew up expecting to be drafted for another war.

Today thoughts of such conflict among EU nations are unthinkable, thank God!

Thanks also to the story of the stunningly rapid yet lasting Franco-German reconciliation after the Second World War! For that story is central to the whole post-war European development. It is the story of a small committed group of statesmen who shared common Christian values, vision and convictions concerning the essential foundations for Europe’s future.

It is a story with a central figure, widely respected and known for his integrity and humility, and universally acknowledged as the ‘Father of Europe’.

Yet the name Robert Schuman remains largely unknown or ignored in the English-speaking world today. If recognised, it is often confused with that of the nineteenth-century German composer, Robert Schumann (double ‘n’). While a google-search today for the name reveals numerous French book titles, English publications are scarce.

Over the past few days I have been working on a small book about Schuman. It is a rich and challenging tale that has led me to the following (for me) surprising conclusion:

The ninth of May, 1950, when French Foreign Secretary Schuman announced a bold plan to bring the coal and steel industries of France, Germany and any other countries who wished to join, under one supranational authority, was the defining moment of modern Europe.

This was the moment that began a process resulting in a ‘community of peoples’ based on ‘freedom, equality, solidarity and peace’–values which Robert Schuman firmly believed stemmed directly from the teachings of Jesus. Europe’s future, he argued, depended on the recovery of Christian values.

The sixtieth anniversary of this watershed event falls in a few weeks: on 9 May 2010.

This is surely an occasion to thank God for unprecedented peace among the EU nations; to reflect on the vision and values which created a moral climate of forgiveness and reconciliation in which a ‘community of peoples’ could be nurtured; and to consider the centrality of Jesus‘ teaching for the future of our continent.

This commemoration, however, is not an endorsement of everything the EU has become since! For much of Schuman’s vision has been allowed to be hijacked. How? By whom?

Join us in Brussels over the Europe Day weekend, May 8 & 9, to commemorate this ‘defining moment‘ and to reflect with us on these themes!

For information on the programme and accommodation, and registration details, see