'Why do you believe?' 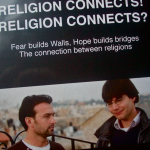 Recently my wife and I were invited to attend an evening in an Amsterdam cinema sponsored by a secular consultancy firm. The theme was ‘Religion connects! Religion connects?’
The company, which prides itself on being voted the best firm in Europe to work for, promotes the slogan, Together we build a brighter future! And they have an important message to offer, namely, we must respect each other as people and listen to each other’s viewpoints.
To sit with 150 people from all sorts of backgrounds in a non-religious setting, listening and talking about faith, was an unusual experience. We watched a film set in Israel featuring two of the firm’s partners. One was a likeable and devout Muslim who prayed five times a day; the other a committed Christian whose love for Jesus shone through in his testimony. Both on the screen and in person after the showing, they dialogued about their faiths, their commonalities and differences.
While the point of the evening was to show that religion connected people, it seemed clearer to me that the connection between these two business partners was their work, despite their beliefs. Nevertheless, they were demonstrating mutual respect for the imago dei–the image of God–in each other.
During question time, someone asked the two partners, ‘why do you believe?’ The Muslim said he had always believed and had never doubted. The Christian answered: ‘Because God loves me.’ To secular members of the audience, I was not sure either answer would have seemed reasonable.
Exercise
The next day, on a long drive to Switzerland, my wife asked me how I would have answered that question. I was not being put on the spot in front of a large audience and had a lot of time to think through a response.
Yet it seemed an exercise all of us should undertake, to prepare a well-grounded, concise response that could make sense even to non-believers.
Peter tells us always to be ready to give a reason for the hope in our hearts (1 Pet 3:15).
So, having had a lot more time than these two business partners had to think through their response, here are five reasons I’d give in answer to the question, why do I believe?
I believe:
One, because of God’s Book of Works (Creation). I simply do not have the blind faith to believe that this awesome cosmos, our incredibly finely-tuned earth, our fearfully-and-wonderfully-made bodies and our deep instincts for love, beauty, justice, meaning, imagination and story, resulted from an impersonal, freak accident of slime-plus-time. To conclude that a super-intelligent and personal Being initiated the cosmos is, to me, most reasonable.
Two, because of God’s Book of Words (The Bible). Even secular philosophers acknowledge this book as the source of concepts often taken for granted, such as the dignity and sanctity of human life, equality, democracy and freedom. To dismiss the Bible as outdated and irrelevant is to expose our ignorance of its unparalled, profound and ongoing influence on our lives.
Three, because of God the Living Word (Jesus). One thing we cannot reasonably say about the central figure of the Bible is that he was simply an outstanding moral teacher or a great prophet. Jesus made such outlandish claims for himself that he was either a clever liar, a dangerous lunatic, or who he claimed to be: Lord and Saviour.
Four, because of God’s Story (History). While many atrocities have been committed in the name of Christianity, those faithfully spreading the story of Jesus have tamed tyrants, liberated slaves, emancipated women, defended orphans, championed the voiceless, reconciled enemies, comforted the suffering and transformed communities like no other movement in history.
Five, because of my story (Experience). In my own life and in the lives of many friends and family members, I have personally and repeatedly experienced the transforming power of God’s love, his guidance and provision. I know of no other reasonable alternative.
All these reasons convince me that God loves me. And He loves you too. That’s why I believe.
Till next week,
Jeff Fountain